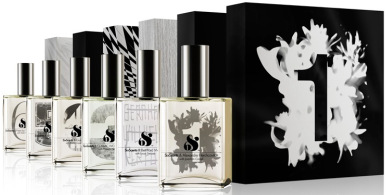 Fragrance 1: Urban Tropicalia ~ by Alexandre Herchcovitch. According to perfumer Joachim Correll, "The inspiration for this fragrance was driven by the way that Alexandre creates fashion: The creative liberty he uses to design fashion which can be used equally by men or women. This fragrance can be worn at any time, for any occasion, as a form of self expression, to be daring, or simply for the pure pleasure of wearing a fragrance. The Alexandre Herchcovitch scent evokes freedom and sensuality, and similar to his fashion, the perfume is striking, emblematic and transcends categories". Featuring notes of cedar, amber fond, lemon, cassis de bourgeons, lime, green apple, apricot, jasmine, tagete, freesia, cinnamon and musk.

Fragrance 2: Wicken 3000 ~ by Bernhard Willhelm. According to perfumer Lucas Sieuzac, "A light, fresh, clean scent that embodies a fusion of the elements. The idea was to create a perfume close to the elements of water and air, but with a futuristic approach. Express ‘the Back to nature’ side of Bernhard with a pure & essential fragrance." The notes include sea breeze accord, bergamot, water jasmine and sheer musk.

Fragrance 3: The Spirit of Wood by Cosmic Wonder Light Source. According to perfumer Philippe Paparella-Paris, "The inspiration for this fragrance comes from Cosmic Wonder Light Source’s nature oriented fashion collection. Inspired by the designers memory of a scent experienced during a walk through an eucalyptus forest, a selection of fresh green top notes were combined with fig leaves and enlightened by green grass playing with fresh cut cypress. The idea was to create a rough and natural fragrance, using a lot of essential oils with a focus on the woody notes such as vetiver and hinoki." The notes include green grass, fig leaves, cypress, elemi, coriander, cedar, vetiver, hinoki and white amber.

Fragrance 4: Diagonal by Gareth Pugh. According to perfumer Emilie Coppermann, "Contrast, ambiguity, duality. Gareth Pugh said about his style: "it’s a struggle between lightness and darkness;" this is what I tried to translate in this perfume. The contrast between different raw materials, masculine and feminine, rough and smooth, dark and light, fresh and sensual." With notes of dill, black pepper, nutmeg, palissander, black tea, amyris, white amber and musk.

Fragrance 6: Teen Spirit by Preen. According to perfumer Mark Buxton, "The idea we had with Preen, was to capture an English summer garden after the rain - light, natural, floral, fresh, but not sweet. Its sparkling top note, made of calabrain bergamot and a unique seashore accord is wrapped with magnolia and Turkish rose. The tingling spicy scent of red pepper sustained by hazelnut leaf and rhubarb give the fragrance its natural depth. Finally, a touch of violet wood for the long-lastingness and pleasurable feeling." With hazelnut leaf, rhubarb, bergamot, seashore accord, red pepper berry, rose, magnolia, violet wood, sandalwood and musk.

The Six Scents: Series One fragrances will be available in a limited edition of 2000 individually-numberd bottles per designer. The price will be $85 for 50 ml, concentration unknown. They will be sold online at Seven New York (other retailers include Colette in Paris, Joyce in Hong Kong, Curve in Los Angeles, Reborn in Montreal). You can read more about the project at the Six Scents website. (via press release)