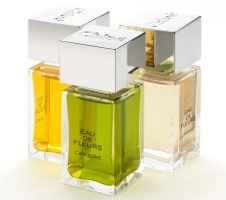 I can almost hear the executives at Coty as they kicked around ideas for new fragrances. "What about Chloé?" one of them might have said. "Isn't it time to come up with something new?"

"I don't know," another executive said, low-fat, extra hot, caramel latte at her side. "We've pretty much squeezed the life out of variations on the original fragrance."

"Well, let's look at the Chloé brand. Young, fashionable, casual. Super into khaki and tan leather this season. They don't want anything complicated."

"But we've already given them narcissus, rose, as well as the original tuberose. Then another take on the original's name, just to confuse people into buying it by mistake. But wait," the executive sat up straighter. "Marc Jacobs is making money hand over fist on his single-note splashes. Why don't we try something like that — except more expensive?"

"Sure, but look how many companies churn out khaki pants? Still, Chloé pants are selling like hotcakes."

And so a trio of single-note Eaux de Toilette was born.

Eau de Fleurs Neroli (clary sage, tonka bean, white musk, amber, mandarin, orange, rosemary, neroli, peony, and cedar) is by perfumer Aliénor Massenet. I'd like to write a detailed description of the scent, but to me it only smells like one thing: soap. A pale yellow, golf ball-sized soap shaped like a rose sitting with a bunch of other little, flower-shaped soaps in a suburban guest bathroom. Sometimes it's nice to smell soapy, and if that's what you want, I recommend Caron Nocturnes or maybe Narciso Rodriguez Essence. If you want to smell like Neroli, try Annick Goutal Néroli or Jo Malone Orange Blossom.

Eau de Fleurs Lavande (bergamot, violet, tea, lavender, iris, musk, vetiver, and ambergris) is by perfumer Domitille Bertier and is my favorite of the three, although I probably wouldn't wear it even if someone gave it to me. Lavande is a smooth, vaguely peppery lavender without the resin you smell in real lavender, and without the rest of the fixings of a classic fougère. Lavande sweetens gradually as it wears. I think Lavande appeals to me because there are so few non-aftershave-like lavenders out there. (Jean Patou Moment Supreme is my favorite. If you get the chance to smell it, don't pass it up. The old Dana Ambush — not the 1990s version, but the 1950s-1960s version, a completely different scent — is great, too. Then, of course, there's Guerlain Jicky.) But if I never smelled Lavande again, that would be all right.

Eau de Fleurs Capucine (bergamot, lemon, neroli, galbanum, sage, juniper berry, rose, jasmine, lily of the valley, ambroxan, and musk) is from perfumer Louise Turner.  "Capucine" is the French name for "nasturtium". Doesn't the idea of an eau de nasturtium sound intriguing? I love them. (Chop a shallot, a handful of nasturtium blossoms, and a little lemon zest and fold them into softened butter. Form a log in plastic wrap and put it back in the refrigerator. For the next month you'll have a fabulously colorful and tasty butter to slice into coins to put on fish, mix with green beans, or simply toss with angel hair pasta.)

Instead of capturing the sharp, herbal scent of nasturtiums, Capucine smells to me like a sweet cologne based on the smell of a grass stain, but not as good. I almost had to dump the whole glass sample vial on my skin to get a good sense of the fragrance, and even then it vanished within an hour, leaving a pale lemon and vetiver scent behind. Most any green cologne would be a superior substitute to Capucine.

None of the Eau des Fleurs last long and must be meant to be sprayed liberally after a shower. You could get the same effect by washing with a good soap. That said, I do like the idea of having a light, fresh cologne to splash on, especially when it's hot out. I keep a jug of Jean Naté in the refrigerator for just that purpose. The $135 price tag for one bottle of one of the Eau des Fleurs would cover a a whole lot of Jean Naté.