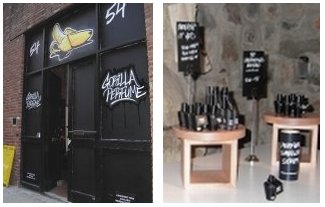 Gorilla Perfume, the new fragrance division of Lush, has been promoting its line of scents with a traveling “fragrance gallery." This exhibit is promoted by Gorilla Perfume as “a winding olfactory maze of wonderment,” and it was recently installed in New York City for three days of sensory delights.

The gallery was set up within a converted brick townhouse building on a cobblestoned street in SoHo, and it occupied three levels of rooms and corridors. A printed map guided visitors through the building, where the Gorilla team had utilized nine atmospheric stonewalled chambers to bring its various scents alive through decorations, lighting, and sound effects (not to mention a refreshment or two). 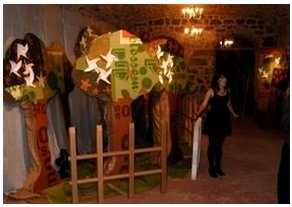 Orange Blossom, for example, was illustrated by a “grove” of colorful cardboard-and-burlap trees; visitors were handed rice-paper blotters dipped in an edible, orange-watery interpretation of the fragrance. Imogen Rose perfumed another room, which was illuminated by pink fluorescent bulbs, with waves of scented bubbles; and The Smell of Weather Turning was introduced in a small, dark chamber lit only by flashes of “lightning” and filled with the recorded sounds of thunderclaps and chirping insects. 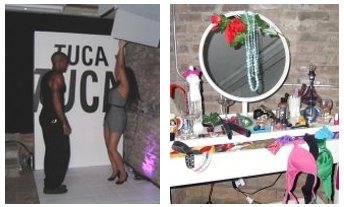 Gorilla Perfume definitely espouses a playful sexuality in certain fragrances: Tuca Tuca was showcased in a room set up like a TV studio, complete with live dancers swaying to the “Tuca Tuca” song, and the jasmine-heavy Lust was visualized as the cluttered bedroom of a teenaged girl who has just dolled herself up for a night of clubbing. 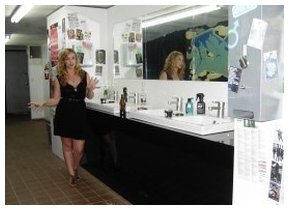 Some areas, like the hallway that displayed The Smell of Freedom and its limited-edition component fragrances, were shadowy and serious. Others, like the imagined men’s restroom where Dirty and its accompanying body products were set out, were bright and humorous.

The final section of the gallery offered its visitors a cocktail inspired by The Hairdresser’s Husband, served in tiny flasks at a bar, before steering them towards the boutique where Gorilla Perfume’s fragrances could be purchased. 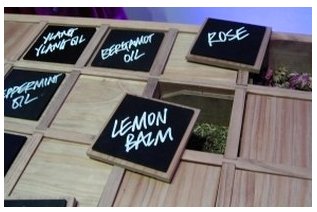 In one corner of the shop stood a table-top display that looked like a large checkerboard; it turned out to be horizontal cabinet whose many drawers contained perfumery ingredients — dried botanicals, essential oils — to be examined and sniffed. It was a satisfying close to the tour, since it worked as an apt reminder of the raw materials behind the whole Gorilla Perfume experience.