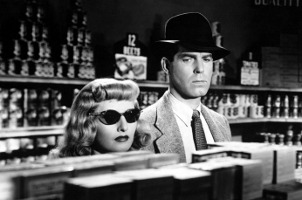 It's been hot here. It's pushing 100 degrees, and like most people in my neighborhood I don't have an air conditioner. When night comes, neighbors sit in boxer shorts under their porch lights drinking cold, cheap beer and swatting mosquitoes. Even feral cats move slowly. What's a girl to do? Descend to the basement with a martini and a stack of film noir DVDs, that's what. Here in the light of an old swag lamp with the chest freezer kicking in now and then I immerse myself in the black and white world of femme fatales, private eyes, and gangsters. And of course I think, what perfume would they wear?

Let's start with something easy: the femme fatale. Think of Ava Gardner as Kitty Collins in The Killers. She's beautiful, unattainable, and just when you think she's yours she double crosses you. Frédéric Malle Carnal Flower and Robert Piguet Fracas come to mind right away. Lanvin My Sin or Caron Narcisse Noir might be good choices, too. The "corrupt flower" of Penhaligon's Amaranthine would be a good bet when the femme fatale is settled in a humid, exotic location like Jane Russell in Macao or  Bette Davis in The Letter. Rita Hayworth in Gilda is more of a Guerlain Shalimar. Barbara Stanwyck in Double Indemnity calls for something seductive but cheap — maybe Coty Sand 'N Sable. Same with Lana Turner in The Postman Always Rings Twice.

Sometimes, though, the femme fatale doesn't quite earn the stars of these bombshell perfumes. For instance, Mary Astor as Brigid O'Shaughnessy in The Maltese Falcon falls flat, in my opinion. She comes off as more maternal than dangerous and might rate Dana Tabu, but that's it.

Not all film noir female leads are femmes fatales. Gene Tierney, as the title character in Laura, is elegant, kind, and a businesswoman. As she makes a point of telling the detective investigating her supposed murder, she cooks, too. Sure, everyone wants her, but she's not out to break hearts. I'd scent this type of film noir lead with Christian Dior Diorissimo or one of the lighter Annick Goutals. Jean Patou Joy would suit her, too. Closely related to this category is the spurned lover, usually a good girl who mistakenly takes up with a hoodlum then turns herself around. Lilly in The Killers (played by Virginia Christine) is a good example. I might put her in Caron Fleurs de Rocailles. 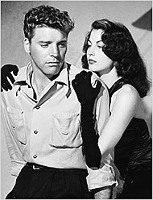 How about the detective (or insurance investigator or worried relative)? I see him in a classic, no nonsense cologne, a stiff fougère, or maybe a leather chypre. Aramis, Guerlain Eau de Cologne Impériale, or Caron Le 3ème Homme might work. And the gangsters? The thugs could wear Brut. The mastermind — the top gangster — would wear something expensive, alluring, and not assertively masculine. Dior Homme, Parfums MDCI Invasion Barbare, Chanel Egoïste, or Chanel Sycomore would do the trick.

What we really need, though, is a perfume called The Blue Dahlia or The Blue Gardenia.

What fragrances say "film noir" to you?

Note: top image is Barbara Stanwyck and Fred MacMurray in Double Indemnity; bottom image is Ava Gardner and Burt Lancaster in The Killers.