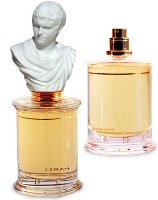 This is a review of Parfums MDCI Invasion Barbare. But first, let's talk for a moment about how men — clean, fresh men — smell.

Some men smell vaguely musty. You walk into their houses or sit next to them on the bus and you know what their laundry baskets smell like. (My theory, based on many years of membership at a food co-op, is that many of the musty men are vegans.) Some men smell intensely personal, like you're smelling their raw flesh. Smelling this kind of man makes me uncomfortable. It's too intimate. Other men have a natural tantalizing fragrance that is gently spicy and musky. A whiff of this scent is more intoxicating than a cocktail. To me, Parfums MDCI Invasion Barbare smells like that type of man after he's showered with lavender and bergamot soap.

You might see MDCI and try to translate it from Roman numerals. In fact, it stands for Marchal Design & Créations Indépendantes, after Claude Marchal, Parfums MDCI's founder. Marchal commissioned three stellar perfumers — the renowned Francis Kurkjdian and Pierre Bourdon, and the relatively unknown but marvelous Stéphanie Bakouche — to create a total of five fragrances, which it released in 2006. Originally each fragrance was named after its creator's initials plus a number showing whether it was the nose's first, second, or third creation for Parfums MDCI. Invasion Barbare, Bakouche's only fragrance for Parfums MDCI, was first named SB-1.

Parfums MDCI's website describes Invasion Barbare as an "oriental fern" and lists its top notes as grapefruit, bergamot, violet leaves, white thyme, cardamom, lavender, and ginger; and its heart as cedar, bourbon vanilla, and musk. Oriental fern is an apt description. Invasion Barbare balances the lavender, citrus, and herbs of a fougère that says "manly, yes" with the warm spices and sweet wood of an oriental fragrance that says "but I like it, too". Its lavender, cardamom, ginger, and cedar are easy to identify, and the rest of the fragrance melds into a skin scent that makes me need to dab my brow and steady my breathing.

Invasion Barbare comes on strong at first spray, although not as strong as its name suggests. (I hear Caron Yatagan saying, "You call that Barbare?") After a few minutes, its sillage subsides, although the fragrance remains rich. After an hour or so, Invasion Barbare mellows into a wood, flesh, and cardamom-ginger blend reminiscent of the far dry down of Amouage Lyric for Women, but without the incense.

This stuff is catnip, no kidding. I'm afraid if I met a man wearing Invasion Barbare I might have to beg him to run away with me. Then, every so often, I'd sneak a spray of it for myself.

Parfums MDCI Invasion Barbare is available in 60 ml Eau de Parfum, in the crystal bottle as shown above ($610) or in a glass refill ($235). For buying information, see the listing for Parfums MDCI under Perfume Houses.