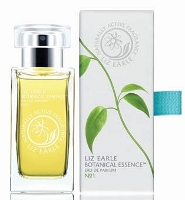 I confess I know absolutely nothing about the Liz Earle brand other than that they were purchased by Avon earlier this year. They're based in the UK and apparently known for their skincare, and they might well be widely adored — my skincare routine was fixed years ago, and I do not stray. Anyway, they released their first fragrance, Botanical Essence No. 1, last year, and this is one of those rare times when I'm reviewing a fragrance only because a PR company sent me a bottle — I had never seen Botanical Essence No. 1 in a store and had no plans to seek it out. Since it turns out to be a fragrance I love, I'm glad it showed up in the mail, and I'll be very sorry to see it go.1

Botanical Essence No. 1 is "over 98% directly derived from natural ingredients", and we all know natural ingredients are usually not as potent or long-lasting as synthetic ingredients, right? The press release recommends that you "spritz all over or spray above and let the mist envelop you", so the first time I tried Botanical Essence No. 1, I sprayed with more abandon than I normally would, and was promptly overwhelmed. Two things went through my mind simultaneously: one, I was going to have to take a shower, pronto, and two, what on earth is in that other 2%? But no, it calmed rapidly, and it calmed into a familiar, and to me, very comforting, smell: leafy green sparkling citrus and herbs, outdoorsy and fresh, with a hint of spice.

Farther on, there's a light rose, still very green and leafy and herbal, over a mossy-earthy-woody base which darkens and warms the longer it is on skin. Botanical Essence No. 1 smells like a retro fresh citrus chypre — I immediately thought of Eau de Guerlain and Ô de Lancôme, and it's also been widely compared to Clarins Eau Dynamisante, a fragrance that has been on the market since 1987 and that I still have never smelled.2 Botanical Essence No. 1 isn't as mossy as Eau de Guerlain, and it isn't as fresh as Ô de Lancôme; the dry down is slightly darker than either.3 As advertised, it smells like natural materials, so it's fresh without any big fake "air freshener" notes, and although it's being marketed as a women's fragrance, to my nose it's entirely unisex.

I love a fresh citrus chypre. My old standbys, other than Eau de Guerlain, are Dior Eau Sauvage and Chanel Cristalle Eau de Toilette, and as much as I enjoyed wearing Botanical Essence No. 1, I can't say I feel the need to buy a bottle given how many fragrances I already own in this category. If you're looking for an old-school fresh citrus chypre, do give it a try. I found the lasting power to be about the same as other fragrances in this category: lavishly applied, expect it to last about half the day.

Liz Earle Botanical Essence No. 1 was developed by perfumer Jean Charles Niel, and the notes include bergamot, mandarin, bitter orange, lemon, cardamom, rose absolute, lavender, geranium, coriander, nutmeg, cedar, vetiver, tonka bean and patchouli. It is available in 50 ml Eau de Parfum, $78. It launches in the US in July, and will be sold at the Liz Earle website and at Studio BeautyMix at Fred Segal in Santa Monica.

1. As regular readers know, we give away all full-sized products we receive for review. Look for a giveaway some time in the next few weeks.

3. With the proviso that my Eau de Guerlain and Ô de Lancôme are both rather old — I do not know whether one or both has been reformulated.