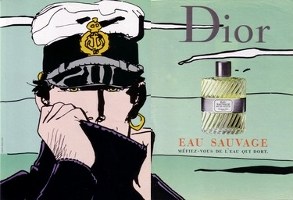 Christian Dior Eau Sauvage, the classic men’s fragrance by perfumer Edmond Roudnitska, was launched in 1966. Like Diorissimo, it was inspired by Roudnitska’s desire to simplify his approach to perfumery. Eau Sauvage is classified as a citrus chypre, and has notes of lemon, rosemary, petitgrain, basil, jasmine, rose, iris, oakmoss, vetiver, and musk.

Eau Sauvage is, to my mind, the quintessential masculine citrus fragrance. The top notes are a bit perfume-y, but it quickly resolves into a wonderful blend of citrus, jasmine, oakmoss and vetiver. The basil and rosemary are muted, but lend a aromatic touch, and it has a wonderful earthy-grassy smell over very sheer florals and a light, dry, woody chypre base. It is clean, crisp, and elegant, and personally, I find it very sexy.

Despite (or perhaps because of) its simplicity, Eau Sauvage was considered an innovative fragrance when it was released in the 1960s. Michael Edwards, in an interview with Basenotes, selected it as one of the "movers and shakers" of the men’s fragrance industry. It was one of the first fragrances to use appreciable amounts of hedione, a synthetic molecule said to have a diffusive jasmine odor with a hint of an aquatic note.

I suppose it smells old-fashioned, even conservative today, but to my nose, it is old-fashioned and conservative in the best possible sense: it smells like something that was made in an era when more time and care was taken with fragrance development, less with fragrance advertising. I hesitate to call Eau Sauvage a unisex fragrance, as there is something rather obviously masculine about it, but women have been wearing it since it was released, just as Roudnitska predicted they would (see Perfume Legends by Michael Edwards, p. 159). It is certainly a regular in my own summer rotation.

Eau Sauvage is readily available online at a reasonable price. Christian Dior also makes an Eau Sauvage Extreme version, but I have never tried it.