At the current stage of my perfume “obsession,” I rarely buy perfume. (Most of my time, and skin, is reserved for new fragrance samples, and I really don’t need any perfume until I use up some of what I already own.) When I first became a perfume-maniac, I bought, often unsniffed, everything in sight. If I liked a fragrance house, I’d work my way through all their masculine offerings. Sometimes, a beautiful ad in a magazine or the sighting of an interesting perfume bottle was all it took to “make” me head to the store and buy a fragrance — and hope for the best. Long, long ago that’s how I came to know Guerlain Héritage: I loved Guerlain and the Héritage bottle* so I bought it!

Héritage, created by perfumer Jean-Paul Guerlain, was released in 1992; it includes notes of lemon, bergamot, lavender, coriander, pink pepper, patchouli, cedar, vanilla and tonka bean. Héritage opens with lots of bergamot and lavender, a creamy, not astringent, blend. As the scent dries on skin, lavender becomes more noticeable and herbal. Pepper and coriander notes are subdued but add a “gleam” to the perfume. Héritage’s heart and base are almost ‘one’; after its opening, Héritage heads directly to its destination: a shimmering, “golden” amber composed of balmy cedar, a touch of musk, patchouli and vanilla (with some lingering lavender). Héritage is a well-gauged/low-impact scent — there is no startling “blast-off” and there is no bumpy landing. 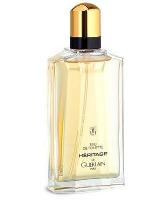 If my memory is correct, Héritage, in the 1990s, had more strength, more presence than today’s version; wearing “old” Héritage was a statement. Today’s Héritage is downright coy compared to the perfume I remember, but it still smells really good. Over the years I’ve gotten smarter when it comes to perfume (common sense trumped impetuousness). Héritage has shed its power suit and put on jeans, a T-shirt, and cardigan (all expertly tailored and stylish). To my tastes, Héritage is more appealing than it used to be — even as it’s become thinner and lost some stamina.

*The Héritage bottle I loved (shown in the top ad) is no longer available.