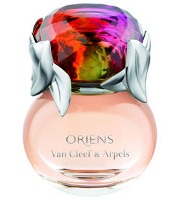 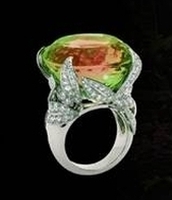 First things first: the name is misleading. Van Cleef & Arpels Oriens is not an oriental fragrance. This Eau de Parfum is reportedly intended to evoke “the ever-changing mystery and magic of the exotic silk route to Asia,” and it's being billed as a “fruity floral chypre.” Created by perfumer Bernard Ellena, it features top notes of raspberry, black currant, and praline; middle notes of jasmine and fresh-cut white flowers; and a base of patchouli.

The bottle’s designer, Joël Desgrippes, modeled Oriens’ flacon after a ring design from Van Cleef & Arpels' fine jewelry collection: an enormous tourmaline set in white gold, like a flower surrounded by diamond-studded leaves. (The perfume bottle mimics the gem's pink-orange-green spectrum, but wisely dispenses with the diamond detailing on the prongs). The press materials for Oriens note that there is “an oriental theme seen in many of the house’s rings,” but again, this information is somewhat confusing; this particular ring, rather than having an “oriental theme,” was created for the “Midsummer Night’s Dream” collection of 2003, which also offered the inspiration for the Féerie perfume bottle (2008).

Van Cleef's original tourmaline ring is titled “Arbre aux Songes” (“Tree of Dreams”) which, come to think of it, would make a pretty nice name for this fragrance. Behind its flashy exterior, Oriens is surprisingly sweet and well-mannered. In its opening phase, a candied orange note is most noticeable. The white florals of the fragrance’s heart, despite their jasmine-centered claim, are airy and not at all animalic. The base, which gradually emerges and hovers beneath the long-lasting fruit notes, is a soft, dry cocoa with just a whisper of spice. If you’re not a patchouli fan, don’t worry; the patchouli is discreet and mild. (As Kevin recently noted, this is often the case in recent releases that advertise patchouli as a note). Nor, despite the Oriens press release’s description of this scent as a “fruity floral chypre,” does it register as a chypre. “Semi-gourmand fruity floral” would be a more accurate tag.

While I was testing Oriens over a period of several days, I kept having the feeling that this fragrance reminded me of something else. I finally figured out what it was: Oriens seems like an older, more sophisticated cousin to Juicy Couture's Viva La Juicy (whose listed notes are wild berries, mandarin, honeysuckle, gardenia, jasmine, amber, caramel, vanilla, sandalwood, and praline). Oriens has a softer "voice" than La Juicy, and she probably owns more cocktail dresses than velour sweatpants. Her hair's highlights are expensively subtle, and while she does love to wear jewelry, it's more likely to be one "statement" piece (such as a tourmaline ring!) rather than a jingling assortment of charms. In short, Oriens may suit someone who is almost tempted by Viva La Juicy but would prefer something less flamboyant.

In addition, Oriens could attract wearers of other fruit-flower-patchouli fragrances who are looking for something new to add to their scent wardrobe: it’s less sugared than Estee Lauder Pleasures Delight, brighter and fruitier than Ralph Lauren Notorious (another victim of the "wrong name" syndrome), and less musky than Tocca Cleopatra. If you’re really looking for something that evokes a traditional “eastern” fantasy, you might want to turn back to a classic like Yves Saint Laurent Opium or Guerlain Shalimar, or a more recent creation such as Miriam Mirani Aqaba, L’Artisan Parfumeur Safran Troublant, Chanel Coromandel, or yes, Montale Sweet Oriental Dream. If, on the other hand, you’re in the market for a new spring fragrance, and you think you’d like a vibrant fruity-floral with a subdued undercurrent of sugar-and-spice, Oriens might just take you on the right journey.