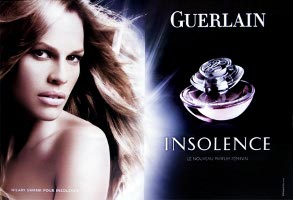 Insolence is the latest fragrance release from Guerlain. Insolence was created by Maurice Roucel, and the notes include violet, raspberry, red fruit pulp, rose, orange blossom, iris, tonka bean, musk and sandalwood. According to Escentual...

In a break away from the traditional pyramid structure, Insolence is contructed around the first olfactive spiral. Rather than a slow progression from head to base, the notes spiral and continue to circulate so that your favourite notes remain prominent from flight to finish.

The perfume is fronted by actress Hilary Swank, in keeping with Guerlain's stated aim "...to attract women who like Guerlain, but don’t feel ready for it yet, which translates into a younger target..." (via cosmeticnews). I would have thought that aim had already been accomplished with L'Instant (2003, and also by Maurice Roucel), but perhaps the target age here is younger still.

Unlike L'Instant, Insolence smells like a Guerlain, in fact, when a friend kindly gave me a sniff before it was released, my first reaction was "Après L’Ondée with nail polish remover". Happily, the roughness of the top notes is short lived, after that, it is, as advertised, red fruits over a still very Après L’Ondée-ish blend of iris and violet, and again as advertised, the red fruits soften but never quite leave the scene, although whether they spiral and circulate, I cannot say.

It is not, as one might fear from the tone of the advertising, an unsophisticated fragrance. The base is a lovely, rather dusky blend of vanilla and sandalwood, and once the top notes calm, Insolence is not overly sweet. Simply put, Insolence is a huge improvement over many of this year's attempts to grab a piece of the youth market pie: it does not smell like Jolly Rancher candy or a Bonne Bell Lipsmacker or the like. I'd rather have a bottle of Après L’Ondée, but if I had a bottle of Insolence, I'd certainly wear it. 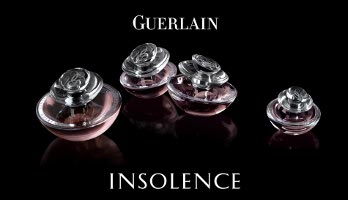 Guerlain Insolence is available at Guerlain counters in department stores now, and will no doubt hit the fragrance discounters eventually.

Update: see a review of the matching Insolence Sparkling Shower Gel, or of the new My Insolence by Guerlain.