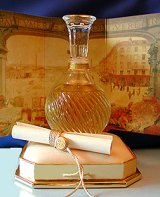 Guerlinade is the accord that was used as a "house signature" in all of the classic Guerlain perfumes, and in many of their modern fragrances as well. It was developed by Aimé Guerlain, the creator of Jicky, and is said to contain bergamot, rose, jasmine, tonka bean, iris, and vanilla.

In 1998, a limited edition Eau de Parfum, also called Guerlinade, was released to celebrate the firm's 170th anniversary. It was based loosely on the signature accord, with notes of bergamot, lilac, linden, rose, iris, jasmine, tonka bean and vanilla. According to Jean-Paul Guerlain, who created the scent, "It was more than a year in the making. I was trying to distill 200 years." (via Women's Wear Daily, 6/19/1998)

Guerlinade starts with deep bergamot over lilac. There is the tiniest whisper of linden, which fades as the rose and jasmine intensify. The jasmine is strong and slightly animalic in the early dry down, but once it settles, the floral notes are very well-blended, and smoothed by a soft, powdery iris-vanilla accord in the base.

The floral arrangement has an old-fashioned, very feminine feel that pays tribute to Guerlain's long history, and as you would expect, it smells like it was made with better quality materials than most firms bother with. All the same, it is a considerably brighter and cleaner fragrance than the classic, hard-hitting Guerlains. The dark, animalic undertones of its forebears, like Jicky, Shalimar and Mitsouko, are held in check — in other words, there is none of the stuff that now strikes many consumers as "musty" — and its modern sensibility is made very clear if you wear it in tandem with any of those fragrances. Guerlinade is slightly more casual, and slightly less sensuous, which may or may not be a good thing depending on your outlook.

Guerlinade was recently re-released, and is now available at the Guerlain boutique in Paris, and possibly at the Roja Dove boutique in Harrods as well. I was thrilled to hear the news as I liked it very much when I first tried it, but there were no bottles to be had. Of course, as soon as it became available, I started to vacillate. I still cannot make up my mind whether I love it enough to buy a whole bottle. Probably by the time I decide, it will be gone again.

Update: I should have mentioned that I am 99.9% sure that Guerlinade is now packaged in the standard Guerlain bee bottle, and not the lovely packaging shown above.

Update 2, 10/06: Guerlain announced in the fall of 2006 that Guerlinade was to be discontinued.