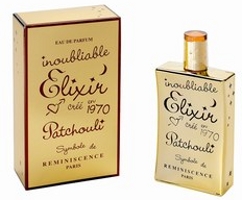 Most perfumistas have a note, or maybe two or three or ten, that they simply can't bring themselves to appreciate. I have a few. I don't love mimosa or heliotrope, although I don't really hate them either. I can live without angelica, and anything more than a pinch of cumin is too much. I'm not fond of melon-y aquatics or very clean musks. My one true bête noire, though, has always been patchouli. Six years ago, a perfume with enough patchouli that even an amateur such as I could smell it was pretty much out of the question — which basically ruled out the entire oriental fragrance family. In the years since, I've mostly come to terms with patchouli, that is, I would no longer say that I hate it, and oriental perfumes are no longer verboten. I still wouldn't say I loved patchouli though, and a fragrance that actually has the word patchouli in the name isn't one I'm going to be rushing out to try.

The Osmoz booklet from the Les coulisses du parfum, Vol III, Legendary woods & resins kit describes patchouli as "woody • camphory • green • earthy • mossy • mildewy". All of that sounds good to me, even the mildewy part — I think of oakmoss as mildewy, and it's one of my favorite smells in the world. But there's something about the particular way that patchouli is mildewy, in combination with the richness and the sweetness, that just doesn't work for me. You'd think that newer, cleaner (molecularly modified) versions of patchouli would work better for me, but they don't always — they usually wipe out much of the earthy part, which to me is like throwing the baby out with the bathwater. I do like Tom Ford White Patchouli, but it could use a few generous handfuls of dirt.

So it's a surprise when I fall for a patchouli fragrance, but it has been known to happen. I loved Montale's Patchouli Leaves. And you know how once in a great while you smell something and you like it but you don't think you really need it, and then months later you're still thinking about it? That happened to me with the now-long-gone Angel La Part des Anges from Thierry Mugler, which was a sort of nearly-drinkable version of Angel that had been aged in cherry wood barrels in collaboration with Rémy Martin. If you could make a cognac out of patchouli, that would be it. "Regular" Angel is not a favorite of mine, but I do wish I had a bottle of the La Part des Anges.

Elixir Patchouli, today's subject, is from Reminiscence, the French jewelry line. Their original Patchouli fragrance was introduced in 1970, and I presume it's done well since it's still around after all these years. For my part, I don't care for it, nor do I care for the newer Eau de Patchouli — which probably means that they're both excellent patchouli fragrances and that true patch fans would adore them. Elixir Patchouli is my kind of patchouli. It was launched in 2007, and is meant as a more intense version of the original 1970 Patchouli. I wish I had samples of the Montale and/or the Mugler to compare, because Elixir Patchouli reminds me of both scents. Like the Montale, it's very woody-barky, and despite being obviously vanillic, feels more dry than sweet (the notes: cedar, patchouli, vetiver, sandalwood, labdanum, vanilla, tonka bean, tolu, white musk). Like the Mugler, it has a "drink me" quality— not in the edible-candyfloss manner of the original Angel, but in the sense that it vaguely reminds me of a dry cognac, especially in the early stages, although if memory serves the La Part des Anges was more fruity-sweet than dry.

Elixir Patchouli is a rich scent, but it's not at all too heavy for spring (I have a feeling it might be a bit much in high summer). It smells like chunks of wood bark mixed with warm, freshly-dug dirt. It's resinous, slightly spicy, and probably more masculine than feminine, although I should think anyone could wear it. It has excellent lasting power, and for a niche fragrance in 2009, it isn't too badly priced.

Reminiscence Elixir Patchouli is $120 for 100 ml Eau de Parfum. It also comes in a body cream, and do please comment if you've tried that! For buying information, see the listing for Reminiscence under Perfume Houses.