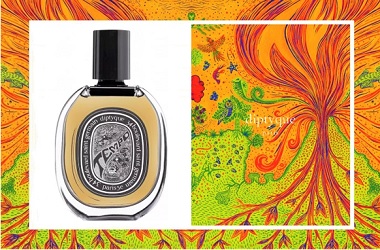 Tempo* is one of two new perfumes that celebrate Diptyque L'Eau's 50th birthday. (I've already tackled the 'softie' of the pair, Fleur de Peau.) Here's what Diptyque has to say about Tempo:

During the 60's, a certain scent was changing the world: patchouli. It conveyed a sense of freedom and spirituality that was closer to Nature, and the hopes of a generation that was reinventing the future. Tempo is a tribute to this olfactory icon. But it's far from the harsh, humid undergrowth scent of yesterday's touchstone. This a nuanced composition of three patchouli extracts from the Indonesian island of Sulawesi, that hovers between elegant and woody, enveloping and earthy. Elevated by violet leaf, Tempo vibrates on the skin with remarkable sophistication.

Sounds like the rebellious, grungy demonstrator of yore has been recast as a retired multi-millionaire with a beach house in Bali, doesn't it?

At first, Tempo smells like fresh patchouli leaves (Pogostemon cablin); it's as if you're crushing the leaves between your palms. Mixing with this slightly "chilly" and camphorous green-leaf scent is the aroma of ground pepper (this is my favorite phase of Tempo's development.) After patchouli leaf's close-up fades, a smoother version of patchouli emerges, sweetened for sure but not overly sugary or juvenile in character. Tempo's violet leaf is in the background and smells natural, fresh and clean; it's not the strident, overabundant violet leaf I often smell in men's colognes. The base of Tempo has a "cosmetic" vibe (think "beige" face powder) with silky patchouli mixing with a bit of musk and "milk chocolate."

Aside: Tempo contains an aromachemical (woody-musky) that exhausts my nose; this note is noticeable/not noticeable/noticeable, etc., as Tempo's opening fades; Tempo, for several minutes, disappears.This on-off-on effect was noted by two other people I sprayed with Tempo.

Many perfume lovers online have compared Tempo to Chanel Coromandel; though their phases of development differ slightly, there's a strong resemblance between the perfumes. (I would need only one of them.) Coromandel and Tempo both have great presence and lasting power (believe it or not, Tempo lasted through TWO soapy showers!) Coromandel gets a slight edge when it comes to complexity, though it fades long before Tempo does. Tempo smells good, if not exciting.

If you're in the market for a patchouli cologne that's wearable all year, or a starter patchouli (a Patchouli Primer) — give Tempo a try. Me? I'm a patchouli Ph.D.; I'd like something a little less "elegant" and obedient, something more challenging, sweaty and inventive, like those 60's rebels and their "harsh, humid undergrowth scent."

Diptyque Tempo Eau de Parfum is $165 for 75 ml. For buying information, see the listing for Diptyque under Perfume Houses. If you're buying Tempo "blind" — and you shouldn't be! — buy it directly from Diptyque; they'll send you a sample with your purchase and if you don't like (or can't smell) the sample, you can return the full, unopened bottle for a refund.