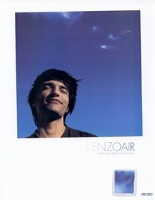 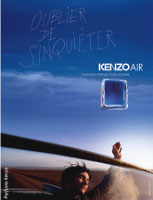 When I reviewed Mark Buxton's Wood & Absinth last week, several people mentioned another vetiver + anise fragrance, Kenzo Air (or Kenzoair, as I believe the brand prefers). How I made it all this time without smelling Kenzo Air is a bit of a mystery to me, but I suppose the name "Air" was not all that appealing? Obviously I needed to smell it, and since it didn't seem to be available locally (and it's too cold to go outside anyway), I ordered some right away. I'd like to point out that I made it a full 13 days into 2009 before breaking rule no. 1 (or no. 2? I can't remember) and buying something unsniffed, but this was cheap enough that it wouldn't have killed me if I'd hated it. And lo and behold, everyone who commented was right: it's wonderful.

... a breath of fresh air… it lets a man discover his inner child. The fragrance denotes an elegant, masculine presence, awakening childhood sensations and familiar impressions, shaking things up and reinventing them. (via lvmh)

And Patrick Guedj, the creative director of Parfums Kenzo, added:

Today, all the men's fragrances that are launched on the market have a very macho approach -- [they're about] manly men with a sense of responsibility, who know where they're going. Men have the right to stay children, to let go, to be free, to be irresponsible and regressive in a way." (via Women's Wear Daily, 6/27/2003)

I posted the tv spot last week; it's a nice fit with the ad copy, although how all of that resonates with the juice itself isn't really clear to me except that like many of the fragrances in the Kenzo line, Air is more sheer than not, and yes, it isn't so "macho" that a woman couldn't wear it. It was developed by perfumer Maurice Roucel, and originally released in both Eau de Toilette (notes: bergamot, anise, vetiver, woods, amber) and Eau de Parfum (notes: angelica, cumin, vetiver). The Eau de Parfum does not appear to be available these days, but an Eau de Toilette Intense with similar notes launched in 2005.

Kenzo Air doesn't have much presence, so I can also imagine that perhaps I sprayed some on a card one day and proceeded to forget all about it. The opening is crisp and bright, and Kenzo Air pretty much stays that way for the duration. The anise is light but there's probably enough there to dismay all you licorice-haters; the vetiver is loamy-earthy, but as airy as vetiver can be and still smell like vetiver, and it has a green, sappy undertone rather like pine needles. I like it very well, but I'm guessing I'll reach for it most in the heat of summer, along with my other summer vetiver favorites, Guerlain Vetiver & Paul Smith Story. A few vetivers that stand up nicely to winter weather: Hermès Vetiver Tonka, Frederic Malle Vétiver Extraordinaire, Lalique Encre Noire.

Worn next to Kenzo Air, the Mark Buxton, unfortunately, smells overwhelmingly bitter and soapy, and sort of plodding. I have not smelled the Kenzo Air Intense, but if you have smelled that or the original Eau de Parfum, do comment!

I do not know what the original bottle was like (it looks nice enough in pictures), but mine is essentially a block of frosted plastic with some blue (glass?) inside. It's pretty much hideous.

You can easily find Kenzo Air at a discount. My 20 ml bottle cost around $16 at Fragrancenet, and it also comes in 50 and 90 ml.

Note: image at top left via imagesdeparfums.fr, at top right via osmoz.

Update: Thanks to Kevin, I've now had a chance to try out Kenzo Air Intense. Air Intense lists the same notes as the original Air, but adds cumin and angelica. It is not a strikingly stronger fragrance than the original Air, in case that's what you're after — to my nose, it still qualifies as "more sheer than not" — although it does have just a bit more presence and lasting power. While I am most decidedly not a fan of cumin or angelica, neither is overwhelming here. The cumin adds a touch more spice and just a touch of that sweaty undertone that cumin lends...I don't find it too much, and if they had amped up the anise and vetiver, it would be a winner. Sadly, they really haven't, and I find that I prefer the original. Do see the comments below though — some people definitely prefer the Intense. My simple advice to anyone ordering unsniffed: if cumin and angelica appeal to you, buy the Intense, if they don't, buy the original Air.