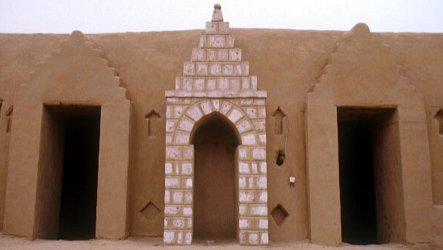 Timbuktu was released by L'Artisan in 2004; it was the second in a series of travel-inspired fragrances, the first being Jean Claude Ellena's Bois Farine. Timbuktu was created by nose Bertrand Duchaufour, who was said to have been inspired by the West African practice of wusulan, a seduction ritual in which women "...concoct a magical salve, with scents of wood, spices, resins and roots. After first letting it macerate, they then let the potion boil away, while their skin absorbs the richly scented swirls of smoke." (quote via osmoz). The fragrance notes are green mango, pink pepper berries, cardamom, karo karounde flower, incense, papyrus wood, balms and spices, patchouli, myrrh, benzoin and vetiver.

I tried Timbuktu shortly after it was released last year, and did not particularly care for it. My memory is that it smelled mostly of patchouli mixed with something sour and sweaty. Recently, a friend gave me a sample and suggested it might be worth another try. Lo and behold, this stuff isn't half bad.

As befits a scent named for a city synonymous in the West with "the ends of the earth", Timbuktu starts off exotic and spicy, with lots of peppery and resinous notes. I don't notice the mango until the dry down, when it starts to add a touch of sour green, and even then it is restrained; I would not describe this as a fruity scent. There is also, just as I remembered, a touch of sweat, perhaps from the cardamom, perhaps from a hidden touch of cumin.

There is some patchouli, but it is not at all overdone — perhaps I originally tried this on a very hot day, for I can't imagine now why I found it so overwhelming. Timbuktu mostly smells like dirt, soft woods, old parchment and smoky incense. There is some sweetness from the myrrh, and perhaps the karo karounde, but it is more dry than sweet, and probably more masculine than feminine.

It is an unusual fragrance, and probably doesn't qualify as "pretty". I do wish L'Artisan still sold 15 ml bottles, as I would buy one in a second, but for now I am putting my sample aside until the weather cools off next month and I can decide if it is something I would reach for regularly.

Timbuktu is an Eau de Toilette and the lasting power is good, especially for a L'Artisan scent. For buying information, see the listing for L'Artisan Parfumeur under Perfume Houses.

Update: L'Artisan did eventually release a set that included Timbuktu in a 15 ml bottle, so I bought it. It is considerably more wearable in cool weather than hot, and has become one of my favorites from L'Artisan.

Note: The photograph shows the Sankore Mosque in Timbuktu, Mali (entry to the prayer hall from the courtyard and exterior mihrab). By Sian Kennedy via Archnet.