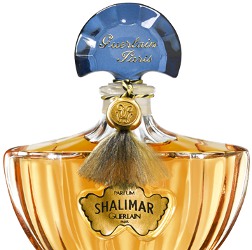 Has everyone recovered from Friday’s group project of wearing Guerlain Shalimar? Today I’ll test your endurance with a Shalimar Face-off. For the past few days, I’ve been wearing different formulations and vintages of Shalimar to suss out their differences.

Before we start, let’s have a quick Shalimar refresher. Jacques Guerlain created Shalimar, and it launched in 1925. Its notes include bergamot, lemon, iris, jasmine, rose, vanilla, incense, opopanox, patchouli, musk and tonka bean. What you smell are chiefly Shalimar’s tent poles of lemon, vanilla and rotting squirrel. Wafting over these tent poles is a complex fabric smelling of incense, amber, tonka, opopanox, vetiver, musk and powder.

For the face-off, I dug out every concentration of Shalimar I had on hand: a 1970s Eau de Cologne, the sought-after 1980s Parfum de Toilette, a 1990s Eau de Parfum and a pre-1985 Extrait (see image below). Before we go on to their comparisons, it’s worth noting that all of these formulations are vintage, so they’ve likely changed over time. Three of them I bought at thrift stores, and I can’t speak to how well they were stored, but they smell pretty well preserved to me.

Now on to the face-off!

In the Eau de Cologne, Shalimar’s basic elements shine clear: bright lemon, rich vanilla and tonka, and, once the lemon fades a bit, definite funk. The lemon is almost rudely insistent and reminds me a little of Lemon Pledge, but after fifteen minutes, the fragrance settles into its signature stained glass vanilla and civet. The Eau de Cologne is curiously bare, though. It’s definitely Shalimar, but Shalimar picked out on a piano rather than played full orchestra. Despite being an Eau de Cologne, it lasts for hours and hours. There’s something bohemian and wonderful about this version.

The 1980s Parfum de Toilette Mitsouko is one of my favorite versions, so when I saw a similar bottle of Shalimar at Goodwill, I snapped it up. The 1980s Parfum de Toilette is much fuller than the Eau de Cologne. As with the Eau de Cologne, instead of smelling a silky blend, I smell Shalimar’s components, like you’d see a building’s floor and walls and ceiling, with space between them. They’re of a whole, yet independent. These components smell rich and full of dimension, from the soft lemon on down to the complex dry down buzzing with amber, wet with vetiver, smoky with incense, and sweet with vanilla.

This Eau de Parfum seems to take the Parfum de Toilette’s elements and whirr them in a blender until they’re a glamourous Shalimar smoothie with a silken powder edge. The first time I wore it against the Parfum de Toilette, I found them really similar until the dry down, when the Eau de Parfum was noticeably more powdery. On wearing them together again, I realized that the Eau de Parfum is altogether smoother. (This doesn’t mean that it’s better — it’s simply different.)

No doubt about it, the Extrait is the queen of Shalimar formulations. Only in the Extrait did I really smell Shalimar’s iris, rose and green notes. In other versions, its florals were stampeded by lemon, vanilla and civet. Not that you don’t notice skank here. Plenty of dirty, fusty notes, like old velvet or the yellowed pages of a book, give Shalimar its iconic, grand lady personality. In Extrait, Shalimar is smokier, too. On a lark, I sprayed Shalimar Ode à la Vanille next to the Extrait. The vanilla version came off like an eager-to-please groupie next to the Extrait’s regal presence. 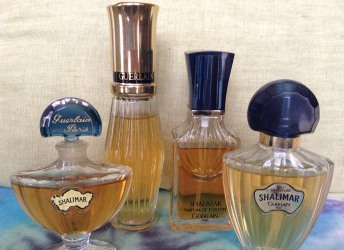 Overall, the beauty of Shalimar is that it’s Shalimar. With only a few cues, you know what you’re smelling. That said, I’m hooked on the vintage Extrait now. I’m hoping to compare the new and vintage Extraits at some point, but if you’re familiar with both, please comment!

Shalimar is fairly easy to come by in thrift and antiques stores. Sure, it takes a little patience, but the regular thrifter or estate sale attendee is almost guaranteed to find a bottle eventually.