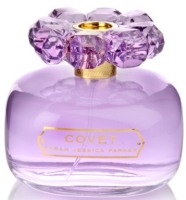 Sarah Jessica Parker's latest is Covet Pure Bloom, the first (and if I had to guess, the last*) flanker to last year's Covet fragrance. Covet may or not be discontinued, but it has disappeared from several department stores so I can only assume that it was not the instant crowd pleaser that Lovely was.

I liked Covet, in fact, I picked it as the best celebrity fragrance of 2007 (as I noted at the time, some people really hated it, but at least it wasn't so mind-numbingly dull that nobody cared either way). Covet's opening was more challenging than Lovely's, and to my mind, it was considerably more challenging on paper than it was on skin — on a test strip, it was very lemony-green and sharp and reminiscent of citronella, and it stayed that way a good long time. I didn't think of it as a wildly risky fragrance, but perhaps anything that isn't an instant crowd pleaser (especially on paper) is risky given today's competitive celebrity fragrance market.

Enter Covet Pure Bloom. I sort of expected Covet Pure Bloom to be the pinkified, floralated version of Covet, with the challenging parts tamped down. It isn't exactly that, in fact, they've mostly dispensed with Covet altogether. Covet Pure Bloom is a very sweet tropical floral (the notes: mandarin, purple plum, coconut water, tuberose, pikake, jasmine, amber, iris, sandalwood and creamy musks). There is the vaguest flash of some of the greenish citrus top notes from Covet, but it's buried under lots of sweet floral right from the start, and once that was over, I wouldn't have pegged it as any kind of relative to the original at all.

Other than "sweet tropical floral" I haven't a whole lot else to add — it's sweet, it's fruity, it's tropical, and the floral notes are rich (too rich for my blood; it verged on strident for a time), but as is usually the case with celebrity fragrances, mostly indistinct, as though they wanted to be very sure that it didn't smell like any particular flower that might be found in nature. The coconut water is subdued (it isn't nearly as piña colada-ish as Sean John Unforgivable), and the far dry down is more vanillic, less "masculine" than Covet's.

There's nothing in the least unique about Covet Pure Bloom, and yes, I found it dull, especially in comparison to Covet, or even Lovely. But I suppose it isn't any worse than any other sweet tropical floral from a celebrity — I do like it better than Baby Phat Fabulosity — and it's bound to find more fans than Covet. If you like sweet tropical florals, it's worth a try, and if I'm extra cranky about it, it's only because I expected better from Sarah Jessica Parker. Hopefully her (rumored) upcoming unisex fragrance will be more interesting.

Sarah Jessica Parker Covet Pure Bloom is available in 50 and 100 ml Eau de Parfum. The lasting power is very good and the sillage is excellent. I had assumed it was a limited edition, but I haven't seen it described that way anywhere online so perhaps it is a permanent addition to the line. Please comment if you know.

* Although who knows, maybe they're working on Covet Strawberry Fantasy already. Extra points for anyone who comes up with a really good name for the next Covet flanker!