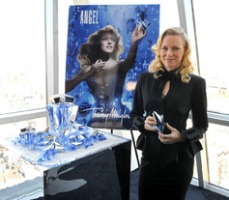 Naomi Watts was the inspired choice for Thierry Mugler, over and above her beauty and her star image. Displaying a modern touch, the actress projects a personality that blends sensuality, voluptuousness and evanescence to evoke the many facets of Angel. A blond fragility, a natural tenderness, an emotional seductiveness...

Look for print and video advertising starting this October. (via yahoo)

And look for a unisex perfume, who knows when, from Sarah Jessica Parker:

With two fragrances already on the market, SJP revealed to E! News that another is on the way. "I have a genderless one that I've been working on for about six months," she said, "and wore it a lot when I was shooting the movie."

The movie, for those of you who live under an even larger rock than mine, would be Sex And The City. (via eonline)

Paris Hilton will be making a personal appearance at the Oxford Street Selfridges in London on May 15 at 12:30, but you've got to show up the day before and buy perfume to get a pass:

Come in store on Wednesday 14 May and receive your VIP pass with the purchase of Paris Hilton’s Can Can EDP. Any purchases made prior to this date will require you to come in store on the 14 May where you will be eligible to receive your pass on the presentation of a valid Selfridges receipt detailing your purchase. (via selfridges)

The rumors are confirmed: Audrey Tautou is the new face of Chanel no. 5.