Every women would like to be thought of as angelic, I think, but shouldn’t be afraid of showing your strengths either.

That's Naomi Watts, quoted in Vanity Fair earlier this year after being named as the new face of Thierry Mugler's iconic Angel fragrance. Here's the first print ad; look for television advertising (and a new bath & body line) this fall. (via vogue.fr) 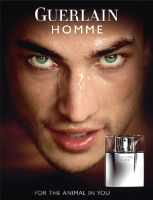 And for the upcoming Guerlain Homme (due for launch in August), Brazilian model Renne Castrucci.

In the television ads, he will be "completely at ease in a jungle setting", in the print ad at right, the tag line at the bottom reads "For the animal in you". (via moodiereport)