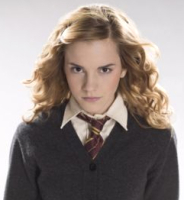 So, as we've already noted, Emma Watson is not going to be the new face of Chanel Coco Mademoiselle (or at least, not yet). Which is fine, as it leaves us open to imagine what fragrance her Harry Potter character, Hermione Granger, might wear.

Something young, intelligent and brave? Feminine, but not fussy or girly. Hermione would probably wear fragrance as an afterthought, if at all. I'm putting her in Hermès Osmanthe Yunnan, and I think the scent is perfect, although let's face it, the Hermione character would not be shopping in Hermès.

While we're at it, I'm putting Ron in Axe Vetiver (which I didn't even know existed until Kevin told me — PLEASE comment if you've smelled it), and Professor Snape gets Lorenzo Villoresi Yerbamate (although I'd put Alan Rickman in Gucci Pour Homme). It seems only right to put one of the characters in Annick Goutal Mandragore, since after all, Camille Goutal mentioned the novels as an inspiration for the scent. I suppose it is too obvious, but I'll give that to Neville.

As for Harry, well, I'm not sure I can imagine him wearing fragrance at all.

Your picks? And of course feel free to scent anyone at all in the Harry Potter universe.