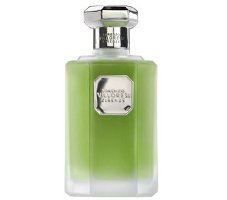 Lorenzo Villoresi recently became the first independent perfumer to win the Prix François Coty. In his honor, today I'm revisiting Yerbamate, a 2001 fragrance from the Fantasy Collection. Yerbamate was named for the South American plant that is brewed to make mate tea. The ad copy describes the scent as...

A boundless greenland touching the sky. The scent of grass, of new-mown hay, of countless herbs and flowers scattered in the fields, stirred by the wind and warmed by the sun. A lonely fire in the meadows, the quiet ritual of tea and mate a gentle veil of smoke, rising and lightly embracing.

Yerbamate opens on citrus and fresh herbs, as advertised, and the first few minutes are sharp and bracing. As it calms, the grass and hay join in, along with bitter tomato leaf, and it begins to smell rather like a vegetable garden baking in the sun on a hot August day. Further on, it switches gears and leaves the fresh outdoors behind; in its place, we get sweet, resinous-ambery notes, along with hints of smoke and soap and a fair-to-middling dusting of powder.

Yerbamate is a dense fragrance, very much in keeping with Lorenzo Villoresi's style — he has a few relatively light scents, but by and large, this is not a line you turn to for transparency. It is also a distinctive fragrance, and I have always admired it greatly without being able to decide if I actually like it. It strikes me as a fragrance that would take a certain kind of person to pull off, which is, I suppose, exactly the point of a niche scent, right? If you've tried Yerbamate, do comment.

Yerbamate is a unisex Eau de Toilette, and the lasting power is excellent. For buying information, see the listing for Lorenzo Villoresi under Perfume Houses.