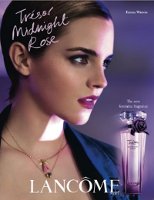 Lancôme has released a few limited edition flankers to Trésor over the years, but it didn’t really court a new generation of perfume-wearers until 2010, when it offered Trésor In Love as a “fresher” interpretation of the 1990s classic. Trésor In Love has just been joined by a second flanker, Trésor Midnight Rose, which is billed as “Charming. Mischievous. Desirable” and seems to be directed at a similarly young audience.

Lancôme names Trésor Midnight Rose’s notes as raspberry, black currant bud absolute, rose absolute, jasmine, vanilla, and musk. (An earlier list also included pink pepper, peony, and cedar.) The fragrance was developed by perfumer Anne Flipo and it is packaged in a purple ombré version of the Trésor In Love bottle. The actress Emma Watson is the “face” of Midnight Rose, and I found the commercial in which she strides along the streets of Paris and beguiles a young bookshop clerk to be charming, indeed. (Two asides: the bookstore appears to be Shakespeare & Company; and, I once saw Emma Watson stepping into a boutique on New York’s Madison Avenue. She was quite petite and pretty, and still very young-looking!)

Actress Emma Watson in a combination teaser / 'behind the scenes' for her upcoming commercial for Lancôme Trésor Midnight Rose. 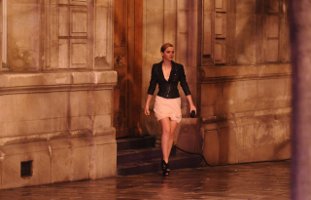 I didn't really like perfumes before because I thought they were heavy, but this one is really light and playful. I feel lucky to embody a fragrance I am so crazy in love with.