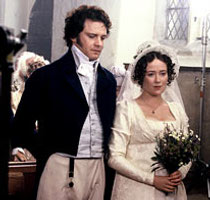 That's right: two lazy polls in a row! That might be a Now Smell This first, but I've been inexplicably exhausted all this week, and can't bring myself to finish another perfume review. This poll is for any of my fellow Janeites out there, and the rest of you will find it dull as nails so please come back tomorrow when Jessica will review the new Clean Well Hand Washes scented by Mandy Aftel of Aftelier.

So...I'm sure I'm not the only one who watched much of the recent Masterpiece Austen-fest on PBS. I enjoyed it immensely, not least because it was so much fun to sit on the couch eating chocolate and muttering under my breath at the "sexy" adaptations — Anne Elliot of Persuasion running like a madwoman through the streets of Bath! and kissing Captain Wentworth on the street! Hrmmph and double-hrmmph!

The poll: name your favorite Jane Austen hero or heroine and the fragrance s/he would wear. My pick: Elizabeth Bennet in Diorissimo. And just for fun, let's put Darcy in Yves Saint Laurent M7, shall we?

Note: image via louisemacdonald.com.au (website of the milliner for the 1995 BBC version of Pride & Prejudice).