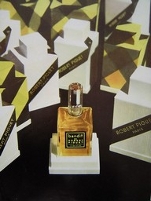 The Leather sisters — Christian Dior Diorling, Estée Lauder Azurée, Piguet Bandit, and L’Artisan Dzing! — lived together in a large house in a neighborhood that used to be popular before everyone moved across town to Fruity Floral. On the mantel was a photo of their father, Knize Ten, who was on a business trip to England talking with the Bentley upholstery people. Next to it was a photo of their mother, Lanvin Scandal, who had been discontinued years ago.

This morning, Diorling was the first to rise. She wrapped herself in a couture satin robe and went downstairs. Just as she was pouring coffee into her Limoges cup, Dzing! came into the kitchen and grabbed a ceramic mug she’d made in pottery class. A cat followed Dzing! and jumped into her lap when she sat down. “Good morning, Diorling,” Dzing! said. “I’ve been thinking about getting a pet monkey. Wouldn’t that be hilarious?”

“A monkey? Absolutely not! There’s no way we’ll have a stinky little monkey running around here. What would the neighbors say?” Near Diorling was a bowl of plums and a vase of ylang ylang and roses.

“But I know you’d love a monkey! You’re really a softy under that tough, prissy exterior,” Dzing! said as she stirred sugar and cream into her coffee. “Do we have any caramel syrup left?”

Azurée came down to the kitchen next. She was wearing white jeans and a tank top and had Ray Ban aviator sunglasses pushed back on her hair. She sprinkled Splenda into her coffee. “Is Dzing! going on about that monkey again? Sometimes I wonder if she’s our real sister. Did you ever notice she’s the only one of us who isn’t a chypre? Maybe Uncle Yatagan is her real dad.”

Diorling gasped. “You know Uncle would never cheat on Aunt Cabochard! I won’t hear any more of this.”

Dzing! got up in a huff, dumping the cat from her lap. “I’m going upstairs to work on my cardboard sculptures,” she said, tattered kimono fluttering behind her as she charged up the hall, nearly knocking over Bandit.

“For God’s sake, can you keep it down in here?” Bandit said as she pulled up a chair. She was wearing a short, black robe. “Diorling, would you live up to your name and pour me a cup of coffee? Black, please.” Bandit rubbed her wrists, which looked suspiciously like they’d recently been tied to a bed.

Diorling looked at Bandit. “What have you been up to? Were you out again last night? You haven’t been, uh, you know…” as Diorling said this, she wondered if any of her sisters had heard the door click shut when her lover snuck out the back way earlier in the morning.

“Relax, Diorling,” Bandit said. I haven’t been doing anything you wouldn’t do. I’m just more upfront about it. Besides, I would have been down here sooner if Azurée hadn’t left so much self-tanner residue in the bathroom.”

“You’re just jealous,” Azurée said. “Every since you were reformulated you’ve been so sharp and thin.”

“Oh, look who’s talking. You only wish Tom Ford reformulated you instead of creating a whole new scent and giving it your name! Besides, you’re nothing but a department store brand,” Bandit said as she plucked a stem of ylang ylang from the vase and crushed its stem in her fingers.

A convertible pulled up outside and honked. Azurée leapt from her chair and headed for the front door, leaving a warm, herbal wake. “Well, I’m going for a drive to the coast. Don’t expect me back before dark. And you might want to do something about that hickey.” The last remark was aimed at Bandit.

Diorling sighed and shut the front door. “I wish you could get along a little better. Azurée may not be couture, but she’s definitely quality, and being so exclusive that you’re only sold in two stores on the planet isn’t all it’s cracked up to be. I should know.” Diorling picked up the photo of her mother, looked at it, and put it down again. “Besides, you never know which of us will be discontinued next.”