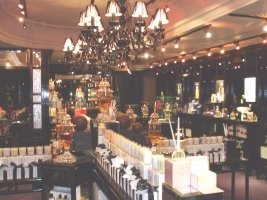 Roja Dove’s temple of scent is part of something called the ‘Urban Retreat’. The word ‘retreat’ is significant here, as the place is tucked away on the top floor of Harrods, and something of a challenge to find.

The trick is to choose the right set of escalators. Ignore the fancy Egyptian escalators in the heart of the building, and instead look for the smaller white-walled space between the Cosmetics Hall and Hans Crescent. Ride this all the way to the fifth floor, and you’ll find yourself just outside the Urban Retreat (lots of niche skincare brands). Go in, and there’s a doorway ahead of you on the right, which takes you into the Haute Parfumerie.

If you’ve ended up on the Egyptian escalators, you’ll arrive on the fifth floor amid lots of sporting goods. The signs will direct you to the right for the Urban Retreat. Ignore them, and head left instead, through the bistro bar. This will deposit you right outside the Haute Parfumerie.

Having found the place at last, you’re now in for a treat. Roja Dove is famous for his stunning knowledge of perfume, and for his connoisseurship. He’s managed to get many perfumes reintroduced, long after they went out of production, and you’ll find most of them here. I’ve never yet encountered Roja himself in the Haute Parfumerie, but one of the great things about this place is that the staff is stunningly well-informed and passionate about perfume. This is not the place you’ll be assured that Britney Spears' Curious is made with all-natural ingredients, and indeed not the place you’ll be likely to encounter Curious. Not that Roja only goes for expensive scents — there are quite a few surprisingly low-priced lines here.

There’s the Baccarat pyramid with Les Larmes Sacrée de Thebes. And, of course, the Caron urns. 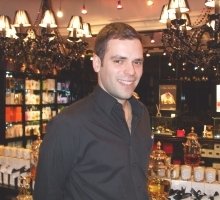 I had a thrilling conversation with the wonderful Clément Pinard (shown), a sales assistant who is genuinely passionate about perfume — and who knows everything there is to know (and he reads NST). He told me how, when he was working in a perfume shop in the South of France, a man came in one day asking to sniff Frederic Malle’s Bigarade Concentrée. Clement carefully explained that this had been created by a famous nose called Jean-Claude Ellena. “Actually,” said the customer, “I am Jean-Claude Ellena.” Clement looked at the still photo of Ellena on the wall, and realised it was true! The great man was looking to compare one of his production scents with another perfume. Clement is always in the Haute Parfumerie on Sundays.

Note that with non-spray bottles, they will carefully dip a blotter into the juice, rather than let you contaminate it with your fingers. There’s also an alcove with seats and a table, where you can leave your shopping while you sniff and come back to sit with a fistful of scented blotters.