The summer limited editions are starting to appear in force. Here are a few scents you can look forward to using (or not) in the heat of August:

It will be in 100 ml Eau de Toilette, and is expected to launch this month. You can see the 2007 version here. (via perfumerflavorist, cosmoty.de)

From Donna Karan, this year's version of DKNY Summer for women, expected to launch in April. I can't tell if they change the juice every year or just use a new bottle (see the 2006 and 2007 versions) but this one is described as "based around the core elements of the original DKNY Women's Fragrance, introduced in 1999, updated with the addition of ripe red berries"; additional notes include red currant, cassis, vodka-soaked mandarin oranges, thyme, tomato leaves, daffodils, white birch and tulip tree wood. In 100 ml Eau de Toilette. (via moodiereport)

This year's summer duo from Issey Miyake includes L'Eau d'Issey Summer for women (shown, in 100 ml Eau de Toilette with notes of rosewater, pear, peony, carnation, osmanthus and precious woods) and L'Eau d'Issey Pour Homme Summer (125 ml Eau de Toilette and featuring mandarin, cardamom, sage and ambergris). If you're curious, see the 2006 and 2007 versions. The 2008 bottles look lovely and I'll post a better picture later if I can find one; they were designed by Santiago Marotto. (Update: see image of men's version at bottom)

Both fragrances are available now at bloomingdales. (via abc-luxe) 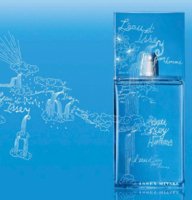