It often puzzles me why perfume brands choose the names they do. At the very least, they seem to assume that consumers are paying very close attention — an assumption that seems entirely unwarranted given the number of new fragrance releases every year. So, if you assumed, reasonably enough, that the new Suede by Michael Kors was a soft leather fragrance, sorry, you were quite off base. If you knew enough to recognize the bottle design (see below), and figured based on the bottle that it was a flanker to the brand's signature fragrance from 2000, Michael by Michael Kors, you were closer to the mark, and if you guessed further that it was a softer, lighter, more summery version, with no relationship to "suede" other than being soft, ding ding ding: you win the prize.

Suede, like Michael, is a tuberose-centered white floral. It's less lush and creamy, less spicy, maybe a little more watery, certainly cleaner and less bold than Michael. It's bright in the early stages, warmer, with a good dose of "sun warmed skin", in the far dry down. Personally I found it easier to wear — I've always liked Michael better from a distance than on my own person. Suede is pleasant and nicely done, and definitely worth a shot if you already like Michael, or if you still haven't found your perfect summer white floral. 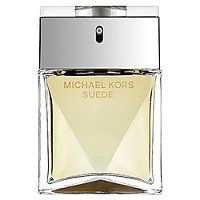 Nearly anyone smelling Suede and Keiko Mecheri's Soussanne next to each other would immediately pick out the niche entry. That's not to say that Soussanne is better, but it's done in a very different, more naturalistic style. It's advertised as a powdery lily, and that's sort of what it is, although the lily is tempered with the datura flower, which lends a slightly more tropical air. There are also hints of green notes and pale almond. Overall, you will pick out the lily, but it isn't a lily bomb by any means (lily bombs are getting harder and harder to find) and it isn't a rich or heady fragrance in any case. The powder is likewise middleweight, and the base, despite the oud, is not particularly dark.

Soussanne is pretty, and has just a bit of an offbeat edge. Still, it is neither as pretty nor as interesting as its price might imply, and I would feel more kindly towards it if it were part of the "regular" Keiko Mecheri line instead of the über-luxury Bespoke collection. As it is, I very much enjoyed wearing it but will live without it quite happily. I only tried two of the fragrances in the Bespoke series — if you tried any of them, do comment!