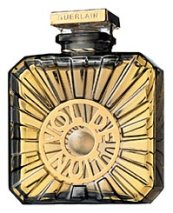 The first time I felt the full power of perfume was partway into my affair with Guerlain Vol de Nuit. I had been wearing the Eau de Toilette, fascinated by its almost off-putting, alcoholic first punch, driving people around me in the locker room at the gym to hold their noses, and then how it quietly absorbed into my skin and emerged as a stronger, almost soapy, but then woody, warm extension of it. Then I tried the parfum. It softened the Eau de Toilette’s edges with stealthy transitions and added a sueded layer of powder at the end. Vol de Nuit parfum was deep and unexpected, and I was love-struck. Really, little hearts flew out of my eyes.

Since then, I’ve seen comments on fragrance reviews about the emotions some perfumes inspire. One woman reported tearing up when she smelled the iris in Chanel Cuir de Russie, for instance. Lots of people talk about the sadness that Guerlain L’Heure Bleue brings. It seems crazy that something so frivolous as perfume could drive a sane, intelligent person to tears, but I’m here to tell you that art — including perfume — can be wildly powerful.

I’ve had this feeling only a handful of times in my life. Actual love, with another person, that is, is joyful and enriching, but can be complicated by fear and apprehension (and then sometimes with in-laws). Art generates feeling that is less complicated but can rattle your emotions all the same. In the 19th century, people called extreme form of it the Stendhal Syndrome. Upon hearing beautiful music or seeing a Michelangelo sculpture, women especially sometimes fainted or burst into tears. It seemed mostly to affect tourists, maybe because the strange positioning of doorknobs, unfamiliar street sounds, and disjointed sleep knock you out of your routine and open you up in a way that doesn’t happen at home.

Once in Paris I had lunch at L’Arpège (a sign about perfume perhaps?). I’d never eaten at a restaurant awarded any Michelin stars, let alone all three of them. I was alone and so nervous that I had to go to the pharmacy ahead of time for antacids. Lunch lasted all afternoon, from the langoustines with ginger and citronelle to the famous soft-boiled egg with maple to the tomato confit cooked at the table for dessert. I got up to use the restroom partway through the meal and returned to find a fresh napkin folded on the table. The food transformed me. I stumbled out into the spring afternoon high and almost breathless with happiness, only partly influenced by the Meursault I’d drank. An Englishman who had also dined alone (he asked for the check in flawless French, then said in English, “Highway robbery!”) left at the same time I did. He flipped open his cell phone and talked to someone he loved. “It’s a beautiful afternoon in Paris,” he said. He felt it, too, the smack of art filling our bloodstreams with buzzing beauty.

There are scores of perfumes that I really like and many that I love — just look at my ridiculous perfume collection. But only a few of them have cut me to the quick. Vol de Nuit extrait did. So did Rochas Femme, once I was ready for it. It’s a rare feeling, and you can only prepare for it by being open and paying attention when you look or taste or smell. But when the emotional connection does happen, the world is that much larger.