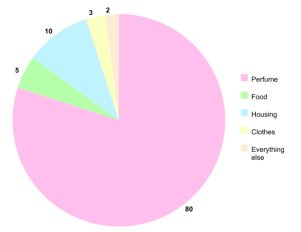 Yes, I caved: I bought the new Hermès fragrance, Osmanthe Yunnan (see yesterday). I am still feeling guilty over the price, to say nothing of the fact that I bought it unsniffed. Last night, I consoled myself with the reminder that I have been very conservative in my purchasing this year, and the Osmanthe Yunnan brought my total for 2005 to a mere 5 bottles of perfume. This morning I went to looking for a fragrance to wear, settled on Ormonde Jayne Ta'if, and noticed next to it the Isfahan that I bought last spring. Oops, that wasn't included in my total, so make that 6. Curiosity got the better of me and I did a quick inventory. The extent of my denial was revealed fairly rapidly; oops again, make that 9 bottles. It could be worse, right? Please, say yes.

I first became seriously interested in fragrance in late 2003. I bought one bottle in November, and another in December. A flurry of spending early in 2004 eventually led to a self-imposed limit of 2 bottles per month. I stuck to that (more or less) for the remainder of the year. This year, I have slowed down, but all the same my "to buy" list currently comprises 15 fragrances, only 2 of which are to replace bottles that are nearly empty.