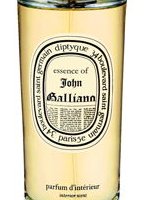 I smelled Diptyque’s John Galliano candle in Bergdorf Goodman some time ago, and thought it was a nice woody scent, but possibly not interesting enough for the price. Today I am wearing the matching room spray, and I have to say I’m considerably more captivated. According to Diptyque, the "subtle, woody scent is reminiscent of smouldering birch wood embers tinted with hints of iris and vanilla musk." It is also said to have notes of leather, moss and myrrh.

The Essence of John Galliano fragrance was created by Olivia Giacobetti, the nose behind Diptyque Philosykos, Frederic Malle En Passant, and Hermès Hiris, among others. I read somewhere (sorry, can’t find the link!) that Galliano wanted to capture the scent of a Russian Orthodox church, and he has certainly captured the feeling of church incense in general. The more immediate association for me would be a bonfire: as advertised, this smells mostly like burning birch logs.

This is a room spray, so it is understandably not a complex fragrance: what you get when you spray it on is pretty much what you get several hours later, although the smokiness does fade a bit. The real surprise for me was that it was still there several hours later; so many room scents have lamentably poor lasting power when worn as personal fragrance.

Fans of Ginestet Le Boise, another smoky woods fragrance, might want to give this one a try as well. The iris & vanilla musk are very subdued, and there is a slight earthy undertone. I like it very much, but it just needs something more to translate to a personal fragrance: more depth, perhaps a bit more sweetness.

The Diptyque Essence of John Galliano candle is easily found online, but the room spray is harder to locate. I know Bergdorf Goodman had it when I was there, but that was some time ago. Galliano hinted some time ago in Women's Wear Daily that he planned to launch a personal fragrance line, but I have not seen another word about it, and Diptyque says they have no plans to issue this particular scent in an Eau de Toilette. Pity!

Update: The Galliano Room Spray is now online at Barney's, and John Galliano has launched his own line of fragrances.