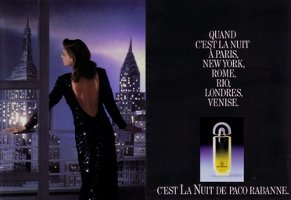 Some perfumes are a bare wisp that register more emotionally than physically. People around you sense something light about you but can’t quite connect it with perfume. Other fragrances are more insistent and complement your day like a pleasant soundtrack. Sure, people smell your perfume, but it’s a natural accompaniment to who you are.

And then there are the thugs like La Nuit de Paco Rabanne. La Nuit doesn’t waste time with seduction. It slips on brass knuckles and tells you and everyone else within noseshot how it’s going to be. And how it’s going to be is your trashiest 1980s nightmare come true. You just might love it.

At first smell (and here with a wince I reapply La Nuit for the fourth time today anticipating the crinkled nose of my poor movie date later on) La Nuit is a frenzy of waxy aldehydes melting into the same kind of dark rose that inhabits Gucci L’Arte di Gucci and Paloma Picasso Mon Parfum. But besides patchouli, moss, and leather, La Nuit's roses swim in honey, musk and tarry civet. Once La Nuit has set its course, it doesn’t veer, and the freaky animalic rose chypre leers and bullies its way through a solid eight hours on skin with minimal change.

And boys. To my nose, La Nuit is firmly unisex. It’s forceful enough to suit anyone who doesn’t give a damn, regardless of gender. As long as you don’t need a fragrance that’s eager to please, and you’re willing to have heads turn your way — and not always with satisfaction — La Nuit is worth a try.

Those of you who have been following perfume blogs for a while might remember La Nuit from Luca Turin’s review on his defunct blog, Perfume Notes. He called La Nuit the “warmest, sultriest perfume imaginable,” and wrote “Spray Tabu on a horse and you get the idea.” (Romantics like me will note with a warm heart that one of the commenters on the post was Tania Sanchez, his future co-author and wife, who astutely remarked that now his readers would long to smell like a horse sprayed with Tabu.)

Although it can’t be beat once in a while, I can’t take La Nuit’s wallop on a regular basis. Good thing, since La Nuit is discontinued. For those of you made of sterner stuff, La Nuit de Paco Rabanne is still readily available online.