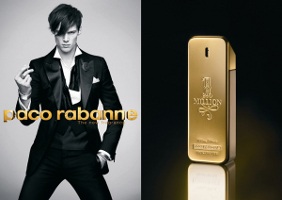 Paco Rabanne 1 Million debuted last August in Europe, but it's never "officially" launched in the U.S. (though it can be purchased at online discounters here). 1 Million was developed by perfumers Christophe Raynaud, Olivier Pescheux and Michel Girard, and it contains grapefruit, blood orange, peppermint, rose, cinnamon, "spice," blond leather, white woods, amberketal (synthetic ambergris) and patchouli. It's difficult to review 1 Million because the fragrance is so well blended. Imagine painting precise squares of color (cool purple, faded pink, creamy green and sunny yellow) side by side onto a white canvas using acrylic pigments, then taking a wet brush and running it thru the middle of all the squares — blurring all the colors with one strong sweep of the brush. The resulting image of this rapid "mixing" is like 1 Million: gray (indistinct) in the center but with traces of residual color (individual notes) around the edges.

1 Million smells like "sugar and spice" with a touch of lavender-orange blossom  and vanillic amber. It also smells like an upscale (slightly retro) barbershop, and it reminds me of Jean Paul Gaultier Le Mâle, Joop! Homme and Givenchy Pi. 1 Million is nicely done, but it's a clone of many men's fragrances that have been on the market for decades so let's use precious American retail perfume space for more interesting fragrances — like Omnia Granato. 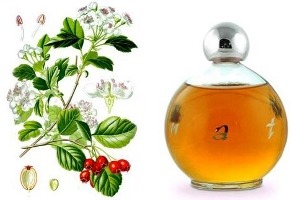 Granato starts off flowery, with 'abstract' non-indolic jasmine, a touch of rose, and a lingering — I can smell it into the dry-down — hawthorn note. (If you've never smelled hawthorn, now's the time to start looking for hawthorn trees to sniff; blossoming will begin shortly in most areas of North America and Europe.) Granato's floral notes turn slightly minty-menthol-y (geranium?) in mid-development, and as the perfume dries down, it becomes almost gourmand — with scents of tempered spices (nutmeg, cinnamon, anise) and toasted, not-too-sweet vanilla bean. Seemingly situated (and wafting) far away from the other notes is a "distant" patchouli-vetiver accord. Overall, Granato is a balmy, neo-gourmand scent (the floral-menthol notes keep it from becoming too "tasty") that can be worn by men or women in any season.

Other perfumes in the Omnia line are: Ambra (amber), Cristallo di Rocca (rock crystal), Acquamarina (aquamarine), Onice (onyx) and Peridoto (peridot); please comment if you've tried any of these.

Omnia Granato is available in 125 ml Eau de Parfum for $135. For buying information, see the listing for Omnia Gioielli under Perfume Houses.