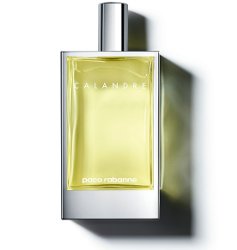 It’s barely February, but my daffodils have buds, and clouds of daphne perfume lurk in pockets on the street. It’s not yet the spring of Easter egg colors and Guerlain Chamade, and it might snow again anytime. No, it’s a sort of pre-spring. It’s the perfect time for the knife-edged green beauty of Paco Rabanne Calandre.

Perfumer Michel Hy developed Calandre, and it launched in 1969. Its notes include aldehydes, bergamot, green notes, geranium, orris root, jasmine, lily of the valley, rose, amber, oakmoss, musk, sandalwood and vetiver. (Michel Hy was a genius of the green chypre — he also worked on Yves Saint Laurent Rive Gauche, Yves Saint Laurent Y and Balmain Ivoire.) In French, the word “calandre” means “grille,” as in the grille on a car or a radiator. It also means “mangle,” a machine that irons linens when you feed them through its long rollers. With Calandre’s feel of freshness and molar-tingling metal, the name fits.

Calandre opens tart and sharp, with bergamot and aldehydes that practically buzz. When the top notes part enough for you to see more deeply into the fragrance, a tight new rose — a rose really too green to cut from the bush — emerges, and it’s wrapped in geranium, lily of the valley and moss. The sensation is jarring, like licking an aluminum spoon full of citrus, grass clippings, torn geranium leaves and rose petals. Just when you think Calandre might be too bitter and assertive to enjoy for more than a few curious minutes, it sweetens slightly and spreads its roots of sandalwood and vetiver. All of this takes maybe fifteen minutes on my arm.

This is when Calandre’s beauty really unfolds. It is spare and nicely balanced, but not banal. Like most great perfumes, it has a definite signature, and once you’ve smelled it, you’ll always be able to identify it. Calandre reminds me more of the simplicity and modern confidence of Geoffrey Beene's vintage fashion than of Paco Rabanne’s late 1960s production of fringe, lamé, and costumes that might have made the trip in Barbarella's space ship.

Liberally applied, Calandre lasts hours on my skin, but it’s quiet after the first hour. I also have an old bottle of Eau de Calandre that’s brighter up top and thinner in the middle than the regular Calandre, but still wonderful. The bottle I’m sampling from for this review is probably from the 1980s, and isn’t labeled for its concentration.

I’ve heard Yves Saint Laurent Rive Gauche is a sister fragrance to Calandre, but it’s been too long since I’ve smelled it for me to comment. I can say, though, that if you want something in the same vein but sweeter and rosier, try Chloé L'Eau de Chloé. For a grassier take with a hint of lemon, Chanel Cristalle Eau de Toilette works. For something more ladylike, try Estée Lauder White Linen.

Paco Rabanne Calandre Eau de Toilette is still in production, although it’s hard to find in stores. Online, you can order a 100 ml bottle from the usual suspects for less than $60.