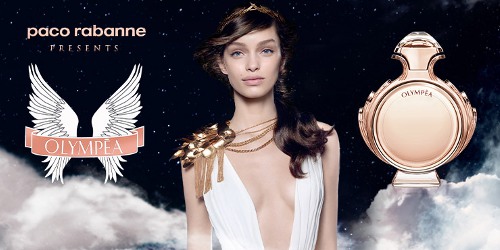 This is how far behind I am: Paco Rabanne has already got Olympéa Aqua on the perfume counters, and I'm just getting around to reviewing the original Olympéa. I've actually had the sample for a bit, but it's mostly just sat there, waiting while I reviewed other, more likely candidates. The folks over at Paco Rabanne have done a great job of keeping the brand relevant with the youth market, but have not shown much interest, so far, with the not-youth market, which of course includes me, and partly explains why the lack of interest is pretty much mutual. I did review Black XS For Her (way back in 2007) but I skipped Lady Million altogether.

Kevin, however, gamely reviewed Invictus (ugly, he said, and I wholeheartedly concur), so here I go1 with Olympéa, the fragrance for the 'modern day Cleopatra'. As is so often the case with these big designer launches, it took a team of big name perfumers — Loc Dong, Anne Flipo and Dominique Ropion — to put it together. It's advertised as a fresh oriental and as a "a unique fusion between a sensual salted vanilla accord and refreshing floral notes",2 and that's all reasonably accurate. Olympéa starts with a very juicy, very green citrus overlaid with a decent lashing of ginger. It announces its fresh orientation right out of the gate, with vague allusions to Glade and L'Eau d'Issey, but it's otherwise a nice enough start. It sweetens up as the top notes fade, with candied but watery floral notes and then creamy vanilla over a woody musk with salty / solar undertones. It has a summery, almost-beachy feel — neither caramel popcorn nor coconut are listed in the notes, but there are faint strains of either or both, and there's just enough powder to lend a velvety finish to the far dry down.

Verdict: It's just fine. It's reasonably wearable and reasonably pleasant if applied in moderation — despite the fresh and watery notes, it is not really a sheer scent. Not surprisingly, I found it both too sweet and too synthetically fresh for my taste, and in general, it called up modern youth on spring break more than Cleopatra. Still, not bad, and a far cry better than Invictus. If you want something along the same lines, but maybe a little more sophisticated, you might try Calvin Klein Reveal. If you want more fruit and less fresh, you might try Thierry Mugler Womanity.

Paco Rabanne Olympéa is available in 30, 50 and 80 ml Eau de Parfum and in matching body products. (I think there was originally an Extrait as well, but perhaps it is already sold out?) The notes include mandarin, ginger lily, aquatic accord, jasmine, vanilla, cashmere wood, sandalwood and ambergris.

1. Just in time for the upcoming award season, in which I assume Olympéa will be a serious contender.