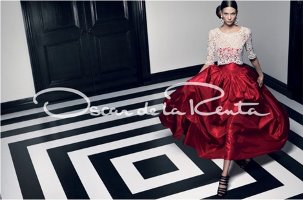 Fashion house established by Oscar de la Renta, who started as an apprentice to Cristobal Balenciaga, and then worked for the Elizabeth Arden line before starting his own brand in 1965. Known for his luxurious evening clothes, and for dressing many of the First Ladies of the US.