I never let anyone tell me writing about perfumes is a waste of time or a trivial activity! Since last April, when I started writing for Now Smell This, I've learned so much about plants, animals, the rituals and symbols of many cultures, history and historical figures, even health matters — all related to fragrance. In the last month, I've learned about Yatagan: a Turkish sword, a city, and a perfume.

The elegant yatagan, or Turkish sword, was used by janissaries for over 300 years (mid-1500s till the late 1800s). These swords bear the name of a southwestern Turkish city called Yatagan in Denizli Province (named after its Seljuk conqueror, Osman Bey, or "Yatagan Baba", who was a blacksmith). Yatagan city was famous for its swords (and unfortunately, today the city is infamous as one of the most polluted areas of Europe, due to a coal-burning power plant).

Yatagans were not only weapons but works of art, incorporating expensive materials like ivory, silver and copper gilt; the yatagan hilts were often encrusted with jewels — diamonds, rubies, emeralds, and coral. Many yatagans have lines from literature engraved or inlaid into the flat sword blade; these literary lines can be intensely personal expressions of the owner or sword maker, or favorite lines from poetry, prayers, or Koranic texts. A strange thought: being run through with a sword engraved with poetry extolling the beauty of the world, a prayer for protection, or holy verses.

Yatagan is a heady cologne, a bracing mix of aromatics, herbaceous/green notes, woods, moss and leather.

Yatagan begins with a hot, peppery, herbal liqueur aroma; one detects fast-forward appearances of fennel, basil, petitgrain, lavender and geranium leaves. This burst of aromatic plant aromas leads to a flare-up of artemisia (wormwood). Wormwood is a "star" in the Yatagan composition; it is a member of the daisy family and, though Caron claims no floral elements are in Yatagan, the slightly sour scent of daisies is present due to the wormwood.

Yatagan also possesses a dusty bitterness (reminiscent of bundles of herbs and flowers hanging and drying on the rafters after a summer harvest). A soft, leather-scented 'breeze' wafts over Yatagan's base notes of mossy pine, oak moss, labdanum and patchouli. In Yatagan's final stage of development there is a hint of malt.

For me, Yatagan is a near-perfect cologne. The wearer smells this delicious scent for over 10 hours but it stays close to the body, providing little sillage.

If any NST readers have ever clicked on "KevinS" in the comments section of my posts and gone to my user profile, you have seen a photo of the cutest man ever — no, not me, but Diego de Fontana, my flower-loving pug, standing amidst hyacinths. When he was a puppy, I taught him a command he obeyed with relish the 13 years of his life: "Smell my PERFUME!" When he heard that command, he would trot over to me, push his flat face against my inner arm and inhale deeeeeply — he seemed intent on detecting every note in the perfume I was wearing.

A month ago when I as trying Yatagan for the first time, I happened to be sitting on the floor. I was thrilled that the latest addition to my life, my cat Vanya, showed an interest in perfumery; he came running to smell my Yatagan-saturated arms! He started by sniffing my arm, proceeded to lick it, then bit it, and finally grabbed my arm with his claws and held it tight (his tail shifting furiously). Vanya and I then had a rambunctious wrestling match that got too serious for my tastes. I anointed the top of Vanya's head with my Yatagan-scented arms and he retreated and rubbed his head wildly against the sofa, yowling all the while. I believe the "offending?" "exciting?" smell that caused the ruckus was the piquant aroma of castoreum. I doubt real castoreum (a scented secretion from the prepuce glands of beavers, used to mark territory and to protect the beavers' coats from water) is in Yatagan these days, but synthetic castoreum was real enough to cause a hissy fit in one feline. 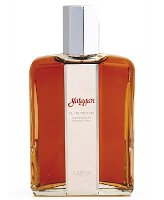 Not counting its intellectual dimension, see how much fun a perfume passion provides? (Vanya will be sampling some perfumes with faux civet soon….)