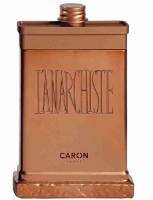 Orange clouds at sunset, red and yellow autumn leaves swirling and brushing against the tall trees where pomanders of clove and orange sway in the breeze. A nearby fire releases the aroma of precious woods as the sky turns from copper to indigo. Sprigs of mint are thrown onto the fire and we move closer to warm ourselves as the first flakes of snow begin to fall. This is the scent of early December.

One of my favorite of all of Caron’s masterpieces, this offering from 2000 should be a must try for anyone in love with Caron’s ability to contrast and harmonize notes. Opening with a tangy citrus aroma, the fragrance quickly reveals a warm, almost nutty heart of woods while a faint breath of green cedar leaves and fresh orange blossom accents the midnotes. L’Anarchiste then progresses into a rich musk and creates an impressive sillage with good lasting power.

L’Anarchiste has been a popular scent for discussion by fragrance connoisseurs due to the range of associations it inspires. Adjectives such as metallic, minty and spicy are often used, though none of these aromas are listed in the composition. While some find the woods to be the focus, others insist the orange notes take center stage.

For me, L’Anarchiste has a story. I first tested it upon its release in 2000 during a warm summer in Manhattan. The scent was far too brooding and dark to enjoy. I quickly dismissed it and it wasn’t until a friend from Montreal sent me a decant in 2003 that I had cause to revisit it. The decant went into my backpack and there it sat until a chilly late autumn day when I found myself being gently caressed by a mystery aroma, definitely not the scent I had chosen that day. After hours of wondering what it could be, I realized that the decant had leaked in my backpack and that it was L’Anarchiste I was enjoying. The discovery was paired with a cloudy afternoon at a Japanese mountainside spa where I relaxed in an outdoor spring as flurries began to fall. I salvaged what I could of the decant and applied the scent after my bath and it’s been true love ever since.

A collector’s piece merely for the impressive stamped black paper box and copper bottle that actually develops a patina as a result of the oils released from being handled, L’Anarchiste is a standout rarity in the world of men’s perfumery, and with a name like that, shouldn’t it be?

Note: Please feel free to comment, but Marlen is offline for the holidays and not sure when he'll be able to respond.