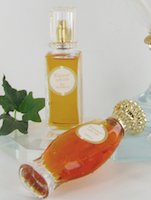 L'Accord Code 119, released in the United States in January 2012, was created for Caron by in-house perfumer Richard Fraysse. Its "striking yet intimate" composition includes notes of blackcurrant bud, Egyptian jasmine, patchouli, blackberry, black pepper, vanilla, heliotrope, musk and amber. It's one of several recent releases that seem intended to update Caron's profile while maintaining continuity with the house's heritage, which must be a difficult task for any century-old brand.

This perfume is promoted as "the House's first fruity and floral fountain fragrance" and as "a bold yet deliciously sweet composition redolent of freshly-picked red summer berries with a rich, oriental woody base." Let's take that first quote first: surely Caron has offered fruit-and-flower blends before 2012? What about Acaciosa, with its pineapple note, or the citrus-topped Alpona? Well, it's the first Caron fragrance to employ berry notes, that much is true; and I do agree with that latter description. I'd call L'Accord Code 119 (or just Accord 119, as the bottle is labeled) a fruity-wood fragrance rather than a fruity-floral.

To my nose, the most prominent notes in L'Accord Code 119 are the blackberry (particularly in the opening phases), the black pepper and the patchouli. The berry and currant notes are tangy and juicy just for a short while, and there might be a few soft jasmine notes blended into the heart, but the pepper and the wood and the musk keep things feeling grown-up and decidedly un-girlish. The blackberry lasts into the fragrance's later development as a wine-y, jammy trace as L'Accord turns increasingly peppery-woody. The patchouli makes a stronger appearance than I would have predicted for a Caron perfume; it's not a down-and-dirty patchouli, but it's not the sanitized patchouli note that appears in so many mainstream fragrances, either.

After the fruity introduction, the whole thing ends up feeling smooth and linear and not too heavy. In some wearings, I even thought I detected just an edge, a penumbra, of the classic Caron oakmoss base hovering behind the fruit and spice and wood notes; at other times, I couldn't catch it, but I hope it's there, just as a trace of the Caron "DNA."  This fragrance could easily be worn by men as well as women, although it seems to be aimed at a female audience. There's something slightly muted about the final effect — I wouldn't mind a bit more vibrancy, as well as a bit more longevity — but overall, I've enjoyed trying L'Accord Code 119.

It's hard to talk about a blackberry-musk fragrance without thinking of a niche classic that I happen to love. And yes, you could imagine L'Accord Code 119 as the love child of L'Artisan Parfumeur's Mûre et Musc and Voleur de Roses, dressed a bit more conservatively than usual for a gathering at the Carons' house. As I wrote in my review of Caron Délire de Roses, I'm more than willing to let these younger guests join the party, as long as they behave respectfully towards their older "relatives." They may end up extending their "family"'s reputation to a younger set, after all, and as long as Caron also maintains its classics (Narcisse Noir, Nuit de Noël, Farnesiana, and the rest) and tries to keep them faithful to their original formulations, I'll be happy.

Note: top right image is PICT0530 by agnesgtr via Flickr; some rights reserved.