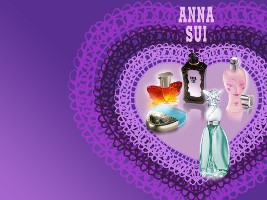 Anna Sui is an American-born fashion designer. After attending the Parsons School of Design, she worked as a stylist, and later as a designer at several sportswear brands. She started her own line, working out of her apartment, in the early 1980s; her first runway show was in 1991, her first boutique opened in Soho in 1992. Her look has been described as "boho to the bone, but in a way that’s more glam than granola".1 The Anna Sui brand is popular worldwide, but does especially well in the Asia-Pacific region.

The line was produced under arrangements with Wella (now part of Procter & Gamble); in 2012 the license will go to Inter Parfums.

See all articles on Now Smell This tagged Anna Sui.