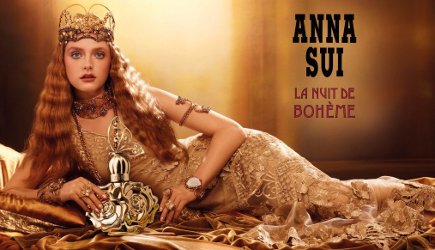 When Anna Sui launched La Vie De Bohème in 2013, I tried it as soon as I could, and then I promptly forgot all about it. I think it smelled a lot like 2010's Forbidden Affair, but you could also have also shelved it with all the Secret Wish flankers. The thing is: yes, Anna Sui does design girlish frocks in sheer fabrics and pastel florals, the sartorial equivalent of airy, grapefruit-y scents in pink bottles. But the designer also offers a more sophisticated aesthetic in her clothing: beaded flapper dresses, cut-velvet tunics, tall boots, fringed scarves in vintage-inspired textiles, lots of black and purple and red.

I'm a longtime Anna Sui customer when it comes to items in the latter category (at least, when they're on the sale rack!), so I was curious about La Nuit De Bohème Eau de Toilette. It's meant to be a "more dramatic and elegant version" of La Vie, with notes of champagne citrus and blackberry; lotus flower, rose and oud; cedar, vanilla orchid, patchouli and amber. It was developed by perfumers Jérome Epinette and Michel Almairac, and it's packaged in a very shiny golden iteration of the La Vie rose-and-butterfly bottle (see above).

La Nuit De Bohème Eau de Toilette opens with a noticeably tart blackberry and a sweeter orange note. The blackberry lasts into the fragrance's development, as a sheer, slightly sharp amber accord floats out from below the fruit top notes and some sweet, synthetic patchouli and light woods finish off the base. For a fragrance with "Nuit" in its name, this one remains fairly bright throughout. It's a "fruitchouli," and not necessarily as "elegant" as it's supposed to be, but it's glam and fun in its own right.

I didn't even realize that an Eau de Parfum version of La Nuit De Bohème had been released until I came across it at the Anna Sui flagship boutique in New York. It was reportedly created as a Middle East exclusive but was later given limited distribution elsewhere. The Eau de Parfum was developed by perfumer Philippe Romano and includes notes of bergamot, mandarin, apple and dark berries; jasmine, orange blossom and black plum; patchouli, sandalwood, amber and musk. This time around, the bottle's roses are black (see below). 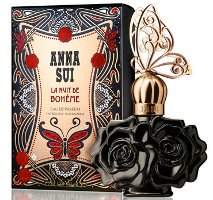 I'm glad La Nuit De Bohème Eau de Parfum's reach has been expanded a bit, because (to me, at least) it's more representative of Sui's Gothic romanticism than any of the brand's perfumes since the original Anna Sui fragrance (a powdery tea rose scent now known as "Anna Sui Classic"). It may not be intense or "dramatic" enough for hard-core perfumistas, but it's deeper and richer anything else in the current collection, and I'm finding it to be a solidly made, comforting-chic floriental.

The Eau de Parfum's plummy fruit notes are a touch darker and juicier than the Eau de Toilette's berries, and the sandalwood makes a much earlier appearance. The florals in the heart have a rose-y element in addition to the white flowers, and I even think I can smell something oud-like that tickles my nose with an almost minty camphoraceous note. The base notes here are warmer and more vanillic than in the Eau de Toilette, with a touch of resin; they cling nicely to a collar or cuffs even after the fragrance has faded away from the skin.

While the Eau de Toilette is nice enough, it's really the Eau de Parfum that I'm craving on these chilly days; it works so well with a little fur scarf or any of my dark print Anna Sui dresses. I've been hoping for the brand to conjure up a fragrance like this one for a while, and I hope it won't be the last one of its kind.