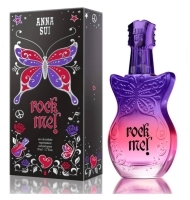 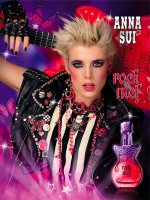 I should begin by admitting that I’m a longtime fan of Anna Sui’s clothing designs and her entire aesthetic. I’ve been known to haunt the Anna Sui boutique in New York, just to browse the latest outfits (and costume jewelry, and fragrances), and I always admire the shop’s décor. I also enjoy the music constantly playing in the background, which sounds like the mix tapes I used to compile for myself and my friends in the late 1980s. Sui has always referred to rock music as one of her inspirations, and her shop is decorated with posters featuring bands from the Woodstock era through The White Stripes and Radiohead.

Since she has always combined fashion with these kinds of cultural references, it makes sense that Anna Sui has just released a fragrance described as a “tribute to the electricity and energy of rock-n-roll.” Rock Me! is an Eau de Toilette with listed notes of pear, green orange, and peach skin; honeysuckle, jasmine, and waterlily; and cedarwood, amber, and vanilla. The bottle is adorable, as Anna Sui fragrance bottles always are: it’s shaped like a purple-and-red guitar and embossed with butterflies, stars, and peace signs. If Jimi Hendrix had a granddaughter, she’d probably love displaying this bottle on her dresser.

Rock Me! is promoted as a “wild young floral fruity essence,” and it comes across more as pop music than as glam or classic rock. Its personality is expressed pretty well by an animated “Rock Me” video: butterflies release twinkling music notes from a guitar, pixies perform a catchy theme song, peace signs and flowers tumble across the screen, and the model Agyness Deyn makes a few appearances, looking over-accessorized but cheerful. The fragrance itself is also bright and neatly structured. The opening phase is a sherbet-like orange-peach blend, slightly acidic around the edges.  Some airy florals bloom in the middle of the fragrance’s development, mostly lily and a mainstream sort of jasmine petal. I don’t notice any pear or honeysuckle, which is fine with me, because those two notes can often feel sticky-sweet on my skin. My favorite part of Rock Me! is the dry-down, when the citrus-smoothie notes melt into an amber-cedar base that feels clean but warm. (When I smelled the fragrance on another woman who was wearing it, I noticed the vanilla more on her than I did on myself.) To summarize, Rock Me! is definitely not wild, it’s youngish but could easily be worn by someone past her teens, and it ends up fruity-woody rather than fruity-floral.

Rock Me! lasted longer than I expected for an Eau de Toilette with so many fruit notes, and I enjoyed it, although nowhere near as much as I love the original Anna Sui fragrance (a powdery tea rose) or even the technicolor gourmand Night of Fancy. It’s a bit more grown-up than some other scents in the line (like Secret Wish or Dolly Girl), and oddly enough, it reminds me of Jean-Paul Gaultier’s Ma Dame, which also employed Agyness Deyn as its “face.” I’m always hoping that Anna Sui will release a dark, spicy rose fragrance, or something quirky like a violet-patchouli blend that would better “match” her clothing and her boutique, but maybe I’ll get my wish next time around.

Note: If you’re an Anna Sui fan living in Hong Kong, South Korea, Malaysia, Singapore, or Taiwan, you can enter a Rock Me contest; the grand prize is a trip to New York to attend the 2010 Anna Sui fashion show, something I certainly wouldn’t mind doing myself.