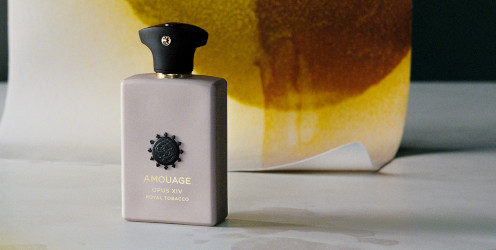 ...a fragrant journey along the Tropic of Cancer from Oman to Cuba, connecting Royal Frankincense to Regal Tobacco. The perfume references the tradition of ‘El Lector’, whose role was to read to cigarmakers in Cuban factories, captivating them with riveting novels like Les Misérables by Victor Hugo and works by Honoré de Balzac, Stendhal, Edgar Allan Poe or Herman Melville until it became an honored ritual as synonymous with the rolling floor as the scent of tobacco. Interpreted by renowned perfumer Cécile Zarokian, a unique accord of Frankincense and Tobacco bursts alive in a novel and rich sensory experience.

[...] Aromatic flashes of Cardamom and Elemi light up a voluptuous heart shining with many facets of flowers and balsams casting their reflections upon the Frankincense and Tobacco duo. Emboldened by Benzoin, Labdanum and Myrrh, ambery notes of Vanilla Absolute and Tonka Bean echo the coumarinic depth of Fenugreek while graceful volutes of Prunol, Bulgarian Rose and Osmanthus Absolute evoke the fruitiness and floralcy of high-end cigars. Supported by Anise and Basil, the typically treacly burnt molasses notes of Liquorice act as a link with the choral finale of smoky Birch Tar, Vetiver and Guaiacwood amped up by the glaring animality of Oud.

*Earlier this year, the brand streamlined and repackaged the Library series. Two of the original fragrances remain: Opus V and Opus VII. Rose Incense from 2019 is now Opus XII, and Silver Oud from 2021 is now Opus XIII.