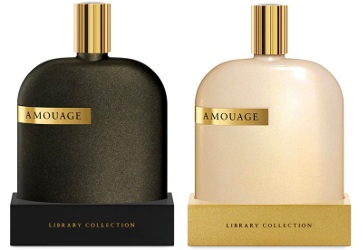 Wow! How I’ve fallen behind on the Amouages! Let’s skip the formalities and go straight to reviews of Amouage Opus VII and VIII from the Amouage Library Collection:

Amouage has thoughtfully given us a brain teaser to describe the fragrance. “Opus VII is a green, woody and leather fragrance evoking the juxtaposition of harmony with the intensity of recklessness.” The fragrance’s “harmony” shows in how its sweetly woody leather and spice heart is leavened with stemmy galbanum and a vapor of crushed pine needles. It’s nicely balanced — not too heavy, not too airy — for about ten minutes.

Then Opus VII collapses into a cashmere-thick blanket of scent that would be comforting in winter, but potentially suffocating in the heat. Its funk comes from its spices. They don’t read bakery at all, nor do they waft perspiration, but they smell vaguely edible and unwashed, in a good way.

Opus VII might complement a person with an assertive physical presence, but for someone like me, Opus VII wears me, rather than the other way around. That said, a dab in sweater weather would be delicious. Like many Amouages, the fragrances wears for hours and hours. It smells friendly and expensive.

Opus VII’s “recklessness” might be in how closely it mirrors the character of Arquiste Nanban, Liquides Imaginaires Saltus, and other recent fragrances that embrace the Big, Dense, and Pleasantly Funky trend. Maybe it will actually help sell the fragrance, but maybe it means that there are less expensive alternatives already on the market.

Now let’s move on to the girlie of the two, Opus VIII, developed by perfumer Richard Herpin. Notes for the woody floral include jasmine, ylang ylang, orange blossom, frankincense, vetiver, gaiac, saffron, ginger, gaiac wood, Jamaican bay, balsam and benzoin. To me, Opus VIII smells like a floral chypre with a difficult but intriguing character. Not everyone will like her, but everyone will remember her.

Amouage’s brain teaser for this one is, “Opus VII is a woody and floral fragrance inspired by the trompe l’oeil effect of creating a dialogue between reality and illusion.” I can’t use this to illuminate the fragrance, but there it is if you want something to chew on as you fall asleep.

How do you feel about Le Labo Ylang 49? If you’ve tried it and can’t stand it, my guess is that you won’t even want to try Opus VII. Opus VII mimics Ylang 49’s aria of jasmine and ylang ylang — an ylang that isn’t the deep cold cream ylang ylang, but a Renee Fleming take on it — with a distinct difference. Opus VII adds a definite hazelnut-loam kick to the woody-musky, almost chypre body. Aldehydes fluff the fragrance with space and projection. The result is an unfashionable, jolie-laide perfume that tells a story that takes time to sort out. It isn’t princess-pretty, and it isn’t exactly classical (the hazelnut bit says “Tom Ford Black Orchid” to me), but the whole fact that it doesn’t pander is intriguing.

I like Opus VIII more at a distance than I do up close, although I do enjoy inhaling the hint of soap and vetiver I get with my nose next to my arm. My guess is that this one won’t be a favorite in the Amouage oeuvre, but that the people who love it will love it wildly. If Opus VIII interests you, my advice would be to try it next to Ylang 49 in case you adore that one more.

Opus VIII lasts all day on skin and longer on fabric. Be careful spritzing it near your scarf unless you’re committed to a few days of its fragrance.