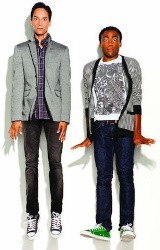 Happy Sitcom Friday! Our community project for today: name a favorite sitcom, and wear a fragrance that reminds you of the show in general, or one of the characters.

I'm wearing Calvin Klein ck one for Community, which I tried but failed to like several times before it took (or, before I watched enough episodes to get it). It is also true that for me, it's much easier to fall for a sitcom when it's already over and I don't have to watch it on network television, one episode a week, with commercials and all. We are currently in the middle of Season 3, and at the moment, it easily makes my list of all time top 5 favorite sitcoms.

Note: top image shows Donald Glover (right) and Danny Pudi (left) as Troy and Abed, from Community. More reading: Why ‘Community’ Is Still One of TV’s Best Comedies 5 Years Later at TV Insider, Community was one of the most inventive shows in TV history. It just started streaming on Netflix at Vox, Community – the best show you’re not watching at Radio Times.