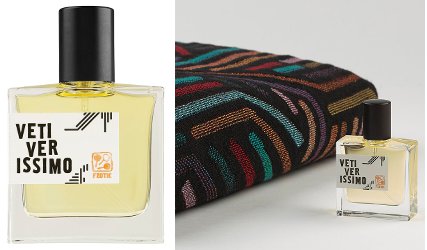 Over the summer, a friend’s son, Anders, turned 13 years old. He’s a stylish kid — he likes to raid his departed grandpa’s closet for ascots and Gucci sunglasses and send the resulting selfies to his mom. He also enjoys the company of middle-aged women, so he asked to host his birthday party at my house.

He was impressed by my perfume collection. I suggested he try a spritz of Guerlain Vetiver. Now, Anders doesn’t have a lot of experience with perfume. When he was a kindergartner, he found a bottle of something Avon that he called his “man cologne” for a few weeks, but that’s it. He sniffed the vetiver and said suspiciously, “It smells like hippies.”

“No!” I told him. “It smells like French executives.”

He nodded once. “Right. Like you’ve smelled a lot of those.”

Ultimately, the vetiver was a hit, and I gave him the bottle. (Apparently he’s painting it for his art class.) When he has a few more years on him, I’ll suggest he try something deeper, something with vetiver’s solid earthiness, but richer, a bit moodier, less citrusy. Something like Bruno Fazzolari Vetiverissimo.

Vetiverissimo’s notes include vetiver, resins, cedar and spices. The Bruno Fazzolari website makes a point of saying the fragrance has no head notes, and I get it. Vetiverissimo feels solid, dense and whole, like holding a rounded chunk of teak. Vaporous top notes have no place here. What you smell on first applying it is pretty much what you smell several hours later as it fades on skin.

And what you smell is dense vetiver infused with incense, a trace of cardamom and cedar for a woody, spicy vetiver hit with a waft of a warm iron radiator. It’s much darker than the landmark gentlemen’s vetivers, Guerlain Vetiver and Lubin Le Vetyver, which lean toward citrusy grassiness. But it’s not as tarry and punk as Fazzolari’s own Lampblack or Maitre Parfumeur et Gantier Route du Vetiver. Vetiverissimo is not as resinous and complex as, say, L’Artisan Parfumeur Timbuktu.

Vetiverissimo is, simply, the well-cut blue jeans of vetiver. It goes nearly anywhere and fits just about everyone. It’s not particularly fancy or self-consciously tough. It’s the real thing and smells like quality down to its last gasps at the end of the day. Its very simplicity and integrity makes it hard to review, because there’s not really a lot to say.

I recently found a Christian Louboutin satchel at a thrift shop. It's made of thick, silky cognac-colored Italian leather and crafted perfectly to fit over my shoulder and hold all my essentials plus a paperback novel. Its only extravagance is a subtle braided trim on the seams. The satchel doesn't call attention to itself, except that it's perfect.

Will Vetiverissimo blow your mind with its inventiveness? No. Neither does my new bag, but you'll need a crowbar to peel it from my hands. Those French executives anointing themselves with Guerlain Vetiver before work? They have nothing to complain about. Still, in their hearts it's the weekend, and they’re at home in the country with a guitar, friends coming for dinner, a good dog, and a fat bottle of Vetiverissimo on the dresser.