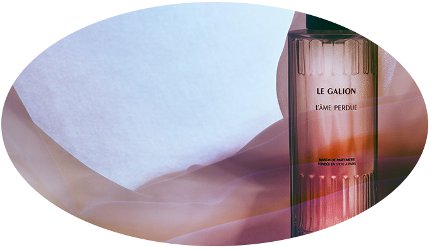 Sure, I’m in Paris, but I wasn’t planning to buy perfume. I have plenty already. Besides, I’d already bought a pair of sandals and some underthings, and my budget was shot. Then I smelled Le Galion L’Ame Perdue, a chypre that would have been right at home on Rita Hayworth’s dressing table. When I discovered I couldn’t buy it in the U.S., I handed over my credit card. This baby was going home with me.

L’Ame Perdue is a complex, spicy-fruity chypre with an initial hint of skank and miles of earthy glamour.1 It smelled familiar to me right away — it winks at Rochas Femme and Guy Laroche J’ai Osé — yet different enough to keep me sniffing. Instead of Femme’s dirty plum, L’Ame Perdue serves its fruit up with cinnamon and cardamom on a mossy wood plank with a vanilla bean. Christian Dior Dioressence’s spicy-woody oriental vibe crossed my mind, too, but despite L’Ame Perdue’s heavy hitting notes, it’s more delicate.

L’Ame Perdue has moderate sillage and good lasting power. It holds onto its floral-spicy-plum heart for a long time before flattening to a vaguely powdery chypre base. If you’ve lamented that perfume houses just don’t make them like they used to, try a sample of this.

Le Galion’s website doesn’t list any retailers in the United States, and a search of the usual suspects doesn’t turn up the brand stateside, either. But Le Galion L’Ame Perdue Eau de Parfum is available in European markets for 140 euros for 100 ml (I bought mine at Jovoy). The Le Galion website offers a 10 ml size for 25 euros.

1. Flores-Roux is also the nose behind Arquiste Ella, another recent fruity chypre lighter and more playful than L’Ame Perdue and definitely worth smelling if you’re a chypre fan.