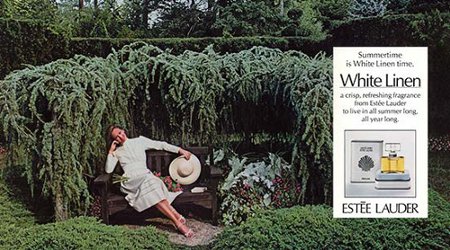 Mention Estée Lauder Youth Dew, and a chorus of “my grandma wore that!” arises. Estée Lauder White Linen might get a similar response, but this time about mothers, especially if those mothers joined the PTA, kept a tidy garden, and knew how to spray-starch a shirt. At one time, it seemed like every shopping mall exuded White Linen. Now, you rarely smell it, except maybe when you lean in to kiss Aunt Phyllis on the cheek.

Sophia Grojsman (the nose behind Estée Lauder Beautiful and Spellbound, Lancôme Trésor and Yves Saint Laurent Paris, among others) developed White Linen, and it launched in 1978. According to the Estée Lauder website, its notes include Bulgarian rose, jasmine, muguet, violet, orris, vetiver, moss and amber. All you need is a quick sniff to add aldehydes and clean musk to that list.

White Linen is a green floral fragrance with an almost audible whoosh of citrusy aldehydes to kick it off. Riding that whoosh is orange blossom, lily of the valley and green rose that smells like a heap of fresh laundry with the steam iron working overtime and a window open to the garden.

Soon, the heart sweetens and turns slightly fruity, like firm peaches and purple flowers. Clean musk keeps it crisp and soapy. As White Linen settles, it sweetens further but not enough to call it sugary. It fades away on my skin after four hours, smelling like I’ve washed with a green perfumey soap kept on a cedar holder.

White Linen’s birthday falls between the eras of racy green chypres and whopper orientals. It makes sense, if you think about it. White Linen’s green floral heart and moss-fluffed body hint at the elegant, disco-bound women who wore Yves Saint Laurent Rive Gauche and Rochas Mystère so well, except that Estée Lauder scrubbed it with soap and added some friendly sweetness to prep it for life in the suburbs.

Where White Linen presages the 1980s is in its fearlessness. A dose of aldehydes wicked enough to make your eyes water? No problem. Attitude to burn? Yep — even if that attitude is more about stationwagons than stilettos.

Seasoned perfume lovers probably already know White Linen well, but if it’s been a while since you’ve smelled it, get to an Estée Lauder counter and give it a sniff. It’s been 40 years since White Linen was released. Who knows? You might catch a hint of something subversive about that oh-so-clean veneer. After all, do you really know what Aunt Phyllis does in the afternoon? 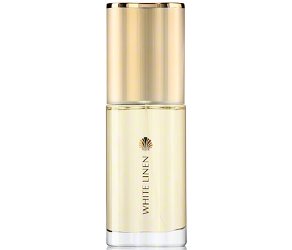