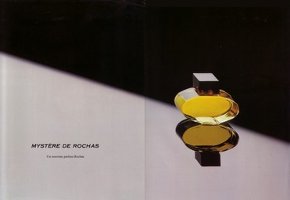 So many perfumes smell like things we know: flowers, fruit, wood, food, spice and funk. A few fragrances — mostly created before the disco era, it seems — are more difficult to pin down. They smell only of themselves. They’re sophisticated, and they’re undoubtedly a challenge to fall in love with in the thirty seconds most perfume shoppers these days take before making the decision to purchase. Rochas Mystère is that kind of fragrance.

In response to a post a few weeks ago, a commenter lamented Mystère’s disappearance. I didn’t have a lot of confidence in my decant, a bonus in a swap years ago, shoddily labeled with scotch tape and a sharpie. As fate would have it, I stumbled over a bottle of Mystère Eau de Parfum at Goodwill just a few days later.

Perfumer Nicolas Mamounas developed Mystère in 1978. Jan Moran’s Fabulous Fragrances categorizes Mystère as a “Chypre – Floral Animalic” and lists its top notes as galbanum, cascarilla, coriander and hyacinth; its heart as violet, narcissus, May rose, jasmine, tuberose, lily of the valley, carnation, ylang ylang and orris; and its base notes as cypress, oakmoss, cedarwood, musk, civet, patchouli and styrax.

Isn’t that a blockbuster list of notes? It sounds grand, rich, and deep. Really though, if I had to sum up Mystère in a few words, I’d say it smells like a soaped leather saddle heaped with oakmoss, settled somewhere downwind of the stable. Mystère is a chypre from the get-go, but it steps away from the old lady-ish (but wonderful) fruity chypre standards like Guerlain Mitsouko or Rochas Femme. It ventures a shade more urban and full-bodied than the tart green chypres so popular in the 1970s. The result is a perfume at once clean and metropolitan, dirty and experienced.

Mystère’s tapestry of notes forms a fragrance different than the sum of its parts. It’s almost a mood more than a scent. Mystère smells like I’d imagine Yves Saint Laurent’s dinner parties smelled when Loulou de la Falaise and Betty Catroux were at the table surrounded by candlelight, smoldering cigarettes, 1930s art and careless wit. In that same way, Mystère is dated, yet eternally chic.

I’d also compare Mystère to wine, although it doesn’t smell a bit like something to drink. Some wine is pretty and easy to drink, but the wine that satisfies best with a meal often isn’t the fruity stuff that’s so great as a summer apéritif. Instead, like Mystère, it’s structured, bitter as coffee, yet silky and rich with the character of the grape from which it’s made. Also like serious wine, Mystère isn’t a perfume for new palates.

And now for those of you newer to fragrance, an aside on oakmoss. Mystère is thick with it. Oakmoss has mega cachet among perfumistas, yet it’s not easy to detect if you haven’t smelled a lot of perfume. If you want to suss out oakmoss’s effect, Mystère is a good fragrance to try. I find oakmoss to be almost more of a texture than a scent. It isn’t particularly appealing on its own. It smells musty and thick, but adds an earthy edge that planes the preciousness off and adds body to many a fragrance. Oakmoss is key to making Mystère something like Studio 54’s intoxicated wink at shower-fresh.

Mystère keeps its shape for hours. It’s clean enough to pass at the office, but mysterious and earthy enough to satisfy after work. When Mystère fades, after about five hours, a touch of sweet musk kicks in before the perfume disappears altogether.

Rochas Mystère is discontinued but still available online. If you’re new to perfume, please don’t spend a lot of time and money tracking it down, because you’ll only curse me when you smell its initially quotidian soapy-mossy-animal scent. But if you stumble over Mystère in a swap or thrift shop, snatch it up. Someday you’ll be very glad you did.