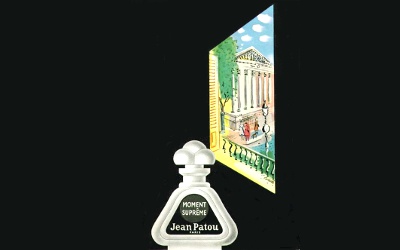 Pardon the name-drop, but a little more than three years ago, through a lucky set of circumstances, I met Thomas Fontaine, the Jean Patou house perfumer.1 For me, it was an amazing afternoon of seeing what a real perfumer’s lab looks like, tasting jasmine and rose Pierre Hermé macarons, and talking fragrance with someone who lives and breathes a world I’ve mostly only read about.

One thing in particular sticks in my memory. Talking about Joy, Fontaine mentioned walking past women — mostly older women — in the street and inhaling their lush, complex sillage, “like a fur.” He described this style of fragrance as “old fashioned.” I bet Fontaine would say the same thing about Moment Suprême.

Moment Suprême is a spicy ambered harmony; its first soft sensual warmth is due to lavender, geranium, cloves and bergamot. Its rose-jasmine heart lends elegance and refinement before its final blossoming from the ambered base which reinforces and draws out its very uniqueness.

Besides creating Joy, Henri Alméras is generally credited with Moment Suprême, but apparently this wasn’t accepted as fact until recently. Here’s a quote from former Patou nose Jean Kerléo I found in Jean Patou: A Fashionable Life:

It was at 10, rue Mariton that Jean Kerléo discovered what he considered “proof” of Henri Alméras’s role in Patou’s fragrance creation. “One day when we were having building work done, the workers brought me some Poiret archives. They were old perfume formulas. Probably left in the Patou ateliers by Henri Alméras. What’s more, the perfume Moment Suprême closely resembles Habéra, one of Poiret’s first creations.”2

Since Alméras created some of the first Les Parfums de Rosine, Poiret’s perfume line, this clinched it. One more potential bone of contention: the Ma Collection booklet establishes Moment Suprême’s birth as 1929, but Jean Patou: A Fashionable Life places it at 1931.

But enough background. Let’s get down to the fragrance itself. I’m basing this review on decants of two Moment Suprêmes: a pre-Ma Collection Extrait and the Ma Collection Eau de Toilette. If vintage Dana Ambush is Miss Moneypenny, Moment Suprême is James Bond’s slightly older lover from an aristocratic family. She never could conform to her family’s expectations, yet neither could she give up the first-growth Bordeaux and sables that came with her name. Besides dallying with Bond, she just might make a pass at Miss Moneypenny.

Moment Suprême, especially in Extrait, is a fat armload of lush flowers with a crisp lavender-geranium veil. Besides rose and jasmine, I wouldn’t count out powdery mimosa, iris, clove-like carnation, and a juicy gardenia, too. It’s a whopper of a bouquet, richocheting between an intoxicating freshness and an almost opaque, past-its-due-date tangle. To me, it smells best caught by accident rather than studied with my nose pressed to my arm.

The whole fragrance shines through the sepia tones of amber and musk. Sometimes I smell something a little dirty and animalic, but, as in Joy, it might well be the jasmine. The fragrance is big with parts and moves surely, but without a ballerina’s grace. But, frankly, I don’t want a ballerina here. I want the whole ballet corps after a few drinks.

You won’t be surprised to learn that the Extrait is bigger, more angular, and more layered. Still, the newer Eau de Toilette is a smoother, creditable version. Moment Suprême in both Extrait and Eau de Toilette lasts about three hours before shrinking to a longlasting but less compelling amber-musk hum.

No, Moment Suprême isn’t fashionable. Like, say, Wagner, it’s complicated, mannered, and requires too much attention for the less dedicated to fully appreciate. It will never make a guest appearance on Housewives of Las Vegas or in the pages of Cosmo. It’s an anachronism, just as old fashioned as Thomas Fontaine called Joy. I love it all the same, if not more, for it.

Jean Patou Moment Suprême is discontinued and costs a fortune online, especially the pre-Ma Collection versions. Cross your fingers that Patou brings it back as part of the Heritage Collection.

1. While I’m name dropping, allow me to mention that my sister used to babysit Merle Haggard’s grandkids. Also, I once met two of the current Von Trapp family singers at a party.