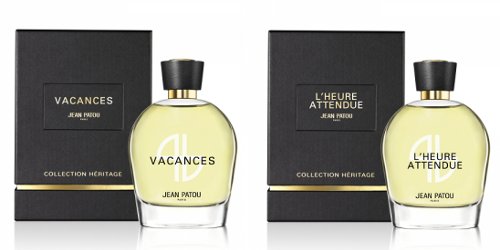 Vacances ~ Originally released 1938. "The freedom and festivity of being granted paid holidays was celebrated in style throughout France by many, including JEAN PATOU. A green powdery floral composed of fresh, green forest accords which are intertwined with delicate florals."

Colony ~ Originally released 1938. "The sky grows dark and rumours of war are abroad. There is a longing to be somewhere else. People dream of a warmer sun and wider horizons. As if an answer to these dreams and longings.. Colony is created. A Green Fruity Floral – an exotic symphony of pungent spices and lush jungle greens leaves – a luxurious scent which adds a touch of Creole charm. The new fragrance will be a modern adaption of the historic Colony scent."

L’Heure Attendue ~ Originally released 1946 (see Angela's review). "A momentous and liberating fragrance created to commemorates that long awaited moment – The Liberation. The mists have blown away, night is no more and the sun has risen again. L’Heure Attendue bears witness to this rediscovered freedom. A woody spicy oriental fragrance – a heartening and subtle fragrance which resonates a refined peaceful aroma, synonymous with a new mellowness of life."